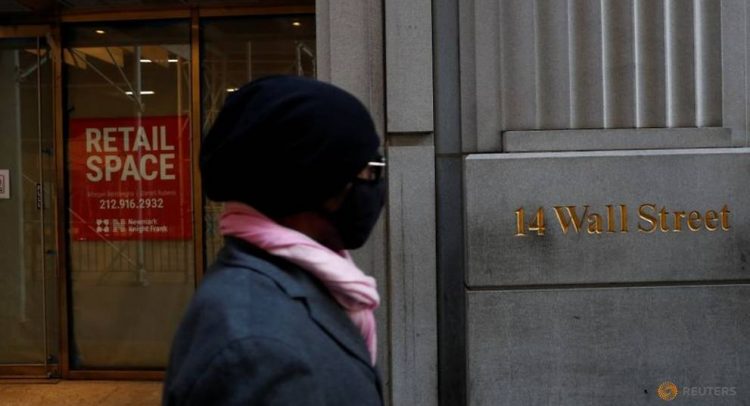 (Reuters) – Wall Street’s main indexes were to set to slip from record levels on Monday as investors locked in gains after a stellar vaccine and stimulus-fueled rally, while Twitter shares slumped following permanent suspension of President Donald Trump’s account.

The micro-blogging site’s shares slumped 7% premarket and were on course to knock off about $2.5 billion from the company’s market value.

Bets on a rebound in business activity in 2021 fueled by COVID-19 vaccine rollouts, larger checks and infrastructure spending under President-elect Joe Biden have underpinned Wall Street’s rise to recent peaks, with focus shifting to economy-linked stocks from the tech-heavy growth names.

“After a very quick run, people start to get a little bit nervous and take money off the table,” said Robert Pavlik, senior portfolio manager at Dakota Wealth in Fairfield, Connecticut.

Global infections surpassed 90 million and several health experts said the rollout of vaccines in many countries will not provide herd immunity from the pandemic this year, citing limited access for poor countries, community trust problems and potential virus mutations.

“The market hasn’t been overly concerned because sooner or later (the pandemic) is going to be eradicated,” Pavlik added.

After official data pointed to a significant slowdown in labor market recovery on Friday, investors will focus on inflation, retail sales and consumer sentiment indicators this week to gauge the extent of economic damage.

Fourth-quarter results from JP Morgan, Citi and Wells Fargo on Friday will kick-off the earnings season, which could offer more clues on if company executives reflect the enthusiasm of a rebound in 2021 earnings and the economy.

Later in the day, U.S. House of Representatives Democrats plan a vote to urge Vice President Mike Pence to take steps to remove President Donald Trump from office after his supporters’ deadly storming of the Capitol, before attempting to impeach him again. [nL1N2JM0ZB]

“If they invoke the 25th Amendment and Pence pushes Trump out, then it’s a problem,” Pavlik added.

“It’s going to be the first time that they’ve ever pushed out a sitting president and that creates uncertainty and volatility in the market because people are worried about what it means for the country because the country is still so divided.”

Boeing Co fell 3.6% after a 737-500 jet operated by Indonesian Sriwijaya Air crashed on Saturday, with 62 people on board.

Eli Lilly and Co jumped 14% after a trial of its experimental Alzheimer’s drug donanemab showed clinical decline in a combined measure of cognition and function in early-stage victims of the disease.

U.S.-listed shares of Baidu Inc rose 1.2% after the Chinese search engine giant said it will set up a company to partner with carmaker Zhejiang Geely Holding Group to make smart electric vehicles (EV).

Reporting by Medha Singh and Devik Jain in Bengaluru; Editing by Maju Samuel

Main Photo: A man wearing a protective face mask walks by a closed store, as the global outbreak of the coronavirus disease (COVID-19) continues, along Wall Street in the financial district of New York, U.S., November 19, 2020. REUTERS/Shannon Stapleton