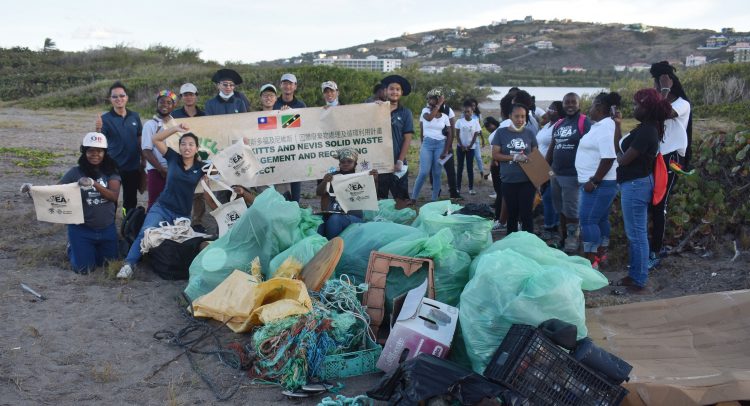 According to Project Manager, Ms Joyce Chang, the three-year (July 29, 2021 to July 28, 2024) US$1 million Solid Waste Management and Recycling Project had already executed a number of activities before it was officially launched on Friday March 4. The first was a beach clean-up on Saturday October 9 last year in honour of Taiwan’s National Day that is normally observed on October 10 (Double Ten Day), which was on a Sunday.

She pointed out that St. Kitts and Nevis produces 32,363 metric tons of waste per year (1.67 kg/person/day), which is much higher than the global average of 0.99kg in Latin America and the Caribbean, and added that it causes the landfill to be overloaded. Other recycling activities, held before the project’s official launch, were executed both on St. Kitts and on Nevis.

Earth Day which is observed on April 22 fell on a Friday this year, but the St. Kitts and Nevis Solid Waste Management and Recycling Project team made up of officers from the Taiwan Technical Mission led by Ms Chang, and accompanied by Ms Crystal Lin-Chun Ou, Third Secretary at the Republic of China (Taiwan) Embassy in St. Kitts, joined volunteers from the St. Kitts and Nevis Clean Seas for a beach clean-up at Conaree on Sunday April 24.

At the end of the beach clean-up a total of 311 pounds of garbage in 19 bags were collected. There were 36 volunteers, and according to Executive Coordinator of the Ripple Institute SKN, Ms P’Della’P Stanley, who thanked all stakeholders including the Taiwan ICDF, the activity aimed at mobilising the youths in St. Kitts and Nevis by equipping them with the proper tools and training to become active guardians of the coastal areas in their communities through environmental monitoring, tree planting and clean-up activities.

Another big activity for the St. Kitts and Nevis Solid Waste Management and Recycling Project was at the St. Kitts Agriculture Open Day which was held on two days, Thursday and Friday 28-29 April, where the Taiwan Technical Mission had a large booth which attracted scores of show-goers and as was crowd-puller to students who stopped by to learn a thing or two about recycling.

“During the two open days we saw many children and students come to our booth and when I asked them what recycling is and why recycling is important, many raised their hands to tell me that they know,” observed Ms Chang. “They told me that they were aware that if the garbage can be reused to a new product, that process is called recycling. Their teachers are already educating them about recycling and they know it is very good for our environment and our communities.”

The St. Kitts and Nevis Solid Waste Management and Recycling Project will be joining other stakeholders on Friday May 20, at the Independence Square in Basseterre, when the research project, Improving Household Nutrition Security and Public Health in the CARICOM (also known as Food and Nutrition (FaN) project) which was conducted by the University of the West Indies’ Caribbean Institute for Health Research holds a public exhibition to mark the end of the project.

The following day Saturday May 21, will see the dedicated team from the St. Kitts and Nevis Solid Waste Management and Recycling Project travel over to Nevis where they will join the local Ministry of Tourism at the Fun Day and Food Fair to be held under the auspices of Exposition Nevis Festival at the Malcolm Guishard Recreational Park in Pinney’s starting from 11:00 a.m.

According to Ms Chang, such high profile events attract large numbers of people who consume foods and drinks and end up generating large amounts of garbage which when not disposed of in the right way will be detrimental to the country’s environment, which the St. Kitts and Nevis Solid Waste Management and Recycling Project has vowed to protect by educating people on the right way of discarding waste through recycling.

“We will also be launching a recycling campaign in recognition of World Environment Day celebrations at the Newtown Playfield parking lot on Saturday June 4 in St. Kitts, and in Nevis on Saturday June 11 at the Delta Petroleum parking lot from 9 a.m. to 12.00 noon on both days,” stated Ms Chang.

While inviting members of the general public to join in the this noble exercise, Ms Chang made the following appeal: “The general public is kindly asked to bring clean plastic bottles and metal cans to our pop-up sites where the top ten contributors by weight can win valuable prizes. We welcome you to join us in improving our environment by going green – Let’s recycle!”

Featured Image – Officers from the Taiwan Technical Mission and volunteers from the St. Kitts and Nevis Clean Seas pose for a group picture after a successful beach clean-up that collected 311 pounds of garbage in 19 bags.