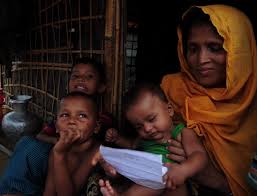 ‘We are always missing you’: Torn apart by violence, Rohingya families connect through letters Inside a bamboo shelter on Bangladesh’s eastern coast, 58-year-old Sait Banu held a dog-eared note from her husband. “If you find a good match for my daughter Una Jamin, you can arrange her wedding,” he urged her in the letter.

“Don’t worry, there is no problem in jail.”

The message, sent from a prison hundreds of miles away in Myanmar’s Rakhine state, was the first Sait Banu had heard from her husband since he was arrested in an army sweep last August that forced more than 700,000 Rohingya Muslims, including Sait Banu and her nine children, to flee to neighboring Bangladesh.

During weeks of violence that the United Nations has called “ethnic cleansing,” soldiers killed, raped, and arrested thousands of Rohingya, survivors and human rights groups said. Myanmar denies the allegations.

With entire villages razed and thousands believed dead, Red Cross workers say many of those stuck in Myanmar prisons have been desperate to know if their families made it to the safety of refugee camps in Bangladesh. And those on the other side of the border, unable to go back, told Reuters they are equally keen to know if their loved ones had survived.

Scraps of paper carried between prisons in Myanmar and the camps by the International Committee of the Red Cross are a rare source of hope for families torn apart by the largest and fastest refugee influx in the region in the past twenty years, the refugees say.

More than 1,600 notes have been gathered from the Bangladeshi camps since August, the Red Cross says. About 160 have been delivered to jails in Rakhine and the replies sent back to Bangladesh.

Reuters saw copies of seven notes, provided by Red Cross officials and hand-written on forms bearing the letterheads of Red Cross organizations, but could not independently verify their authenticity.

The letters often serve as the first proof of life of loved ones. They also include snippets of family news.

“I’ve been imprisoned for three years. Please don’t worry for me,” one letter from a Myanmar jail reads.

“We’re always missing you very much, and I know you’re also missing us,” reads another one sent from the camps in Bangladesh to a Myanmar jail.

“Please send a picture of everybody. I would be so happy to see you all. Give news of the children,” a Rohingya man detained in Myanmar asks in a February letter delivered to his wife in the camps in Bangladesh.