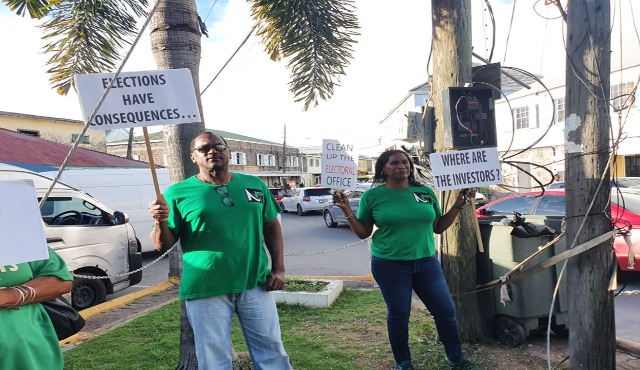 We will fight until justice is served says NRP leader

The Party, which filed a Petition with the OECS High Court on Friday, 6th January, 2023 seeks to challenge the results of the Monday, 12th December, 2022, Island Assembly elections.

The Party had made known its concerns since the night of the poll, when the results were announced, especially in two constituencies.

The incumbent Concerned Citizens Movement won the election, led by Premier Mark Brantley. The CCM secured three of the five seats, after entering the election with a 4-1 margin of victory from the previous election held in 2017.

Leader of the Nevis Reformation Party, Dr. Janice Daniel-Hodge, confirmed her Party’s legal action in a social media post, in which she stated, “With the assistance of a team of lawyers, an election petition has been filed to challenge results of the December 12th NIA elections.

Our democracy is at stake, and we cannot ignore all of the irregularities that took place leading up to the elections and on election night.  Some have said that an election was stolen from us. Not just from the Nevis Reformation Party, but from the people of Nevis.”

Premier Brantley also used social media to offer his first response and confirmation of the Petition, in which he is named as a Respondent., along with the Federal Attorney General and election officials.

During the 12th December poll, Premier Brantley was declared winner of his St. John’s seat by a margin of some 147 votes, against the NRP’s Dr. Patricia Bartlette. In the nearby constituency of St.Paul’s, which has traditionally been a competitive seat, CCM’s incumbent, Spencer Brand was announced as the victor by 27 votes, against challenger, Jaedee Caines.

The other two seats were returned with wide margins of victory, (one each), for the CCM and NRP, respectively.

The focus of the upcoming court battle is likely to be on the St. John’s and St. Paul’s constituencies.

“There are some, who are occupying the halls of government, whose conscience do not allow them to sleep well at nights; how can they when the people of Nevis rejected them? We must fight to the very end until justice is served,” said the NRP leader in her statement.

The filing of the Petition has been accepted by the CCM leader, as a constitutional right of the NRP, but he assured his supporters that his administration would prevail when the legal dust is settled.

“Your CCM-led government elected by you on December 12, 2022 in a free and fair election shall withstand any scrutiny. The CCM won the popular vote and the CCM won the majority of seats,” said the Premier.

However, the NRP leader herself had her own words of dissatisfaction with the posture of the CCM-led administration. “There are some, who are occupying the halls of government, whose conscience do not allow them to sleep well at nights; how can they when the people of Nevis rejected them? We must fight to the very end until justice is served,” said Daniel-Hodge.

Leading up to the December election, NRP hosted a series of protests, accusing the Administration of electoral irregularities. The protest continued on the same day of the swearing-in of the new CCM government on Sunday, 18th December, 2022, at Willet’s Park in Charlestown.

Election Supervisor Oaklyn Peets has also been named as a Respondent in the Petition. No date has been set for the hearing of the matter.