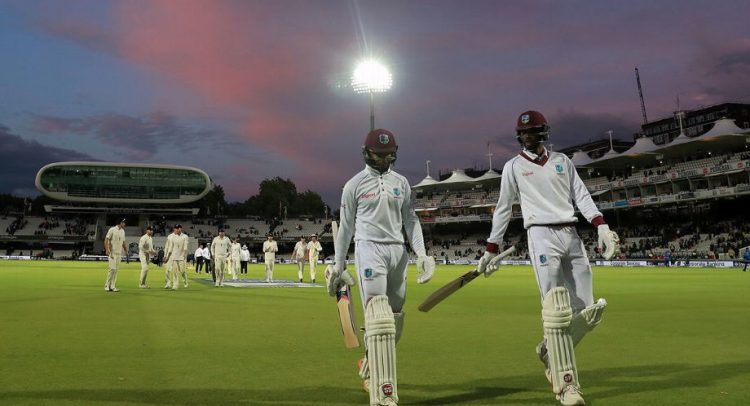 West Indies are on the verge of embarking on an unprecedented trip – full of challenges and unknowns, most of them outside the field of play. Yet it is a risk worth taking, feels Johnny Grave, the Cricket West Indies (CWI) chief executive. Grave, who has been busy sorting the risk assessment with his counterparts at the ECB over the past six weeks, is optimistic West Indies will fly around June 8 for the three-Test series, which is likely to begin on July 8.

In a chat with ESPNcricinfo, Grave talks about the various factors both boards along with their team managements and medical teams have considered minutely before the final decision is made next week.

How close are West Indies from taking the flight to England?
We are in the final stages of discussions with the ECB and they are in the final stages of finalising their plans in order to get the UK government and ECB board support. We are expecting to get a formal offer to tour England probably by the end of the month so that we can get our board’s approval and the players can potentially leave the region [the Caribbean] in early June.

We heard that June 10 is when West Indies will leave for the tour. Is that correct?
We want four weeks before the first Test to prepare our team so we are currently planning on leaving the week starting June 8.

So what are the Test match dates?
The current plan we are working to has the three Tests starting on July 8, July 16 and July 24. As for the venues, we believe it could be the Ageas Bowl and Emirates Old Trafford, but we haven’t had that formally confirmed yet.

How many players would travel to the UK?
The working plan involves taking a 25-player squad to the UK. That would comprise the official Test squad of 15 players and 10 reserves.

A week or so back you had expressed caution, suggesting there was a long way to go before the tour was on. What has changed?
What has changed is the ECB have got more confident that they’ve got a robust and safe plan to deal with cricket in a biosecure environment behind closed doors. Our medical team are getting more confident and comfortable with those plans.

Our players and support staff who we have met with [on conference calls] are beginning to understand what a seven-week tour behind closed doors might look like. And the operations team are getting the logistics together for flying everyone from across the Caribbean to probably Antigua to then depart to the UK on a private team charter. So yes, good progress is being made and we are getting closer to that final plan for our [CWI] board to effectively sign off on the tour and ask the selectors to choose the squad and the players to confirm their participation.

Can you talk about that plan of assembling players and flying out to the UK?

Effectively we want to bring everyone to probably Antigua and that’s mainly because the regional airline LIAT have all their aircraft currently based here so it is easier for them to send planes to the islands to come back to this central hub. So we would look to convene players here by late afternoon, and they would get on a charter flight to the UK immediately after that. We don’t want players to have to stay overnight anywhere in the Caribbean. We want them to be tested about three-four days before departure date and subject to getting a negative test result, they would be chartered into Antigua and then chartered on one aircraft to the UK.

And once they land in the UK?
They would then be transported to their quarantine and training venue where they would spend about three weeks or so during which they can train.

Can you elaborate on the testing process?
To make sure we are not taking testing kits away from anyone in the Caribbean we are going to test players and support staff privately. That also gives a consistency of results of using the same lab for the tests. Everyone would go and get tested in their local country, all those tests would be sent to Florida and the results would come out within – hopefully – 48 hours.

As soon as our board approves the ECB final plan we would effectively select the squad and ask the ECB to book the charter plane. About four days before the charter plane leaves for the UK, everyone would get tested.

What happens if someone tests positive once they are in England?
If someone tests positive at any stage in the tour they would be removed from the main squad and will be placed into isolation within the biosecure environment and will be treated by the team doctor along with the other on-site medical support staff. Should any player have more serious symptoms, they will be treated in hospital at pre-arranged facilities.

What happens if a player infected is playing a match?
One of the things that’s being discussed is if a player tests positive during a match, whether then, similar to a concussion substitute, the ICC would change the regulations to allow a replacement player to take the infected person’s place. There is an ICC chief executive committee meeting in early June where I understand those changes to the regulations or laws on the back of Covid-19 would be discussed and agreed following recommendations from the ICC Cricket Committee who recently met.

Was this point discussed during the calls between ECB and CWI teams?
Yes, it has been. The Caribbean is almost Covid-19 free. However, they would have been tested prior to departure. They are then on private charters within the Caribbean, then a private charter to the UK. And then they enter a biosecure bubble where other than them and the people looking after them – groundstaff, catering and hotel staff – no-one else is allowed. Everyone else in that secure bubble has been tested. So the likelihood of coming into contact with someone who is Covid-19 positive is very, very low. And it is on that basis, and because of the robustness of the biosecure environment and the plans that our medical people are saying to us it is a safe environment. So the chances of someone catching Covid-19 are very, very small.

The players would be in a very, very secure [and] very, very isolated environment for the first two weeks in quarantine, and then when they move into the biosecure Test venues everyone that they come into contact [with] would be in a restricted bubble, therefore not able to leave, and all of them would have been tested prior to coming into that environment and would continue to undergo random testing whilst they are there.

[There is] also some apprehension around getting back to the Caribbean around what the quarantine requirements may be in their home countries. It is such a dynamic situation, but we hope that if they were tested prior to their departure of the UK and if they need be tested again when they come back to the Caribbean that by late July, they wouldn’t have to do any quarantine back here. But clearly, each Caribbean country may have different rules and restrictions so we can’t be certain at this stage. So there is some fear and apprehension, not just about leaving the Caribbean to go on the tour but also getting back home to be reunited with their loved ones.

Recently Jason Holder, West Indies Test captain, likened the Caribbean player’s plight to a frontline worker who has to go to hospital every day. Holder felt the longer players stay away, the greater the monetary impact. Do you agree with him and will the monetary aspect play a role in the tour taking place?
Jason is right. As the economies of the world start to open up again and people start returning to their places of work people will no doubt feel a bit nervous and anxious and the circumstances in their offices and workplaces will probably be a bit different too. Cricketers are therefore no different, they are getting back to work. What we have to do as their employers is ensure that their work environment is as safe as it possibly can be.

So no player has expressed any concern then?
Players have concerns, but certainly I have had no feedback that a player has said, based on what we know now and what we have shared, that they won’t tour. No-one has directly come out and said they won’t tour, but we haven’t formally asked them yet.

Financially CWI has been struggling for a long time. West India are also taking a risk by agreeing to tour. Did a thought that we will skip as the risks are too high pass your mind?
Not from a financial point of view. Our focus has very much been on making sure that it is safe for our players first and foremost and then if it is fulfilling the obligations of the FTP which we signed up and committed to. If we were going to have to pay for the costs of all the mitigating factors then the tour wouldn’t be on. If we had to pay for the additional costs of chartering planes or taking an additional 10 members of the squad in order to prepare on our own then this tour wouldn’t go ahead.

The way the FTP is structured, we are responsible as the touring team for our player match fees and allowances as well as our travel costs to the UK. All other costs for the tour would be picked up by the ECB as they keep all the revenue. Due to the nature of the fact that we cannot fly commercially either within the Caribbean to one fixed point of departure or across the Atlantic, the charter flights and any other additional or exceptional costs that we would incur on this tour would be met by the ECB.

So the tour is then going to happen?
From where we sit at the moment, based on the information we have, based on the fact that every day there are less and less cases in the UK everyone is getting increasingly confident that the tour will happen at some point. Our board meeting is on May 28. If the tour has to take place, by the start of June we would need to have the [CWI] board approval and support by then in order to get the charter flight logistics in place and select the players.