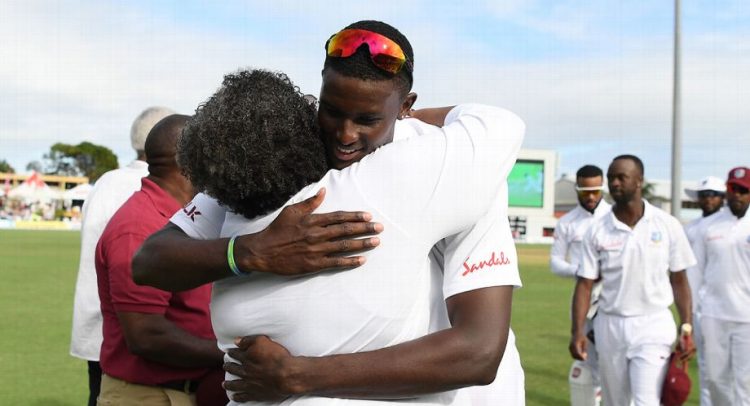 West Indies must be ready for England fightback – Richard Pybus

Richard Pybus has urged his West Indies team to “keep their feet on the floor” after a thumping victory over England in Barbados.

West Indies defied the Test rankings to inflict a 381-run win over England. But while Pybus, the interim head coach, was full of praise for the performance, he has warned his team that England will attempt to hit back in Antigua, location of the second Test starting on Thursday.

“One swallow does not make a summer,” Pybus said. “Is it my job to keep their feet on the floor? Absolutely. We have our goals for the series and we have ticked off the first Test. But England will be hurting. They are a quality side and I have huge respect for them. They will come back at us in Antigua. Our game has to be at the highest level for them.”

Pybus was particularly full of praise for Roston Chase, who claimed eight wickets in England’s second-innings, and Jason Holder, the captain, but pointed out that the overall bowling performance built pressure upon the England side.

“Chase was wonderful,” he said. “Roston bowled exceptionally well. His control was good, he set good fields and exerted a huge amount of pressure throughout the game with his consistency.

“But I think the pressure created by the bowing unit was great, which is what happens when you have four good quick bowlers. As a unit they complemented each other. Roston bowled well but when you have pressure at both ends it is pretty tough for the batters.”

Pybus added that West Indies’ complete performance was down to the leadership of Holder, whom he described as “incredible”. Holder produced with bat, ball and in the field, lifting him to No. 1 in the ICC’s allrounder rankings.

“We delivered on a gameplan with precision,” Pybus said. “The team kept their cool and did what we have looked to do strategically. That is all credit to Jason. He is a calm and composed guy. It is one thing to lead strategically, it is another to lead with performance. There were many special performances but his was exceptional. It was just an incredible performance.”

Meanwhile Johnny Grave, the CWI chief executive, has branded criticism of the West Indies team from former England players such as Geoff Boycott and Andrew Flintoff as “borderline disrespectful”.

“I saw Andrew Flintoff say he can’t believe Jason Holder got a double-hundred,” Grave told the BBC. “Yet I think Jason Holder is a fantastic cricketer and has been performing so over the last 18 months. He’s a brilliant captain.”

Island Girls Make History By Rowing Across The Atlantic