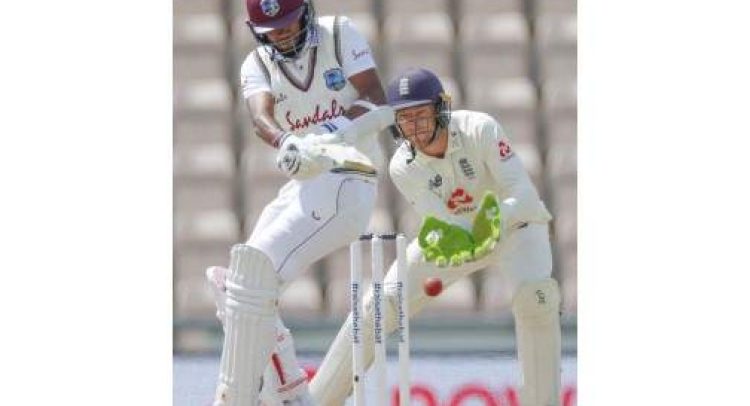 West Indies’ skipper Brathwaite says he will ‘lead from the front’

Dhaka, Bangladesh (AFP) — West Indies opening batsman Kraigg Brathwaite said yesterday he would not change much as a captain and was looking forward to leading the squad in the two-Test series in Bangladesh later this month.

“I obviously speak to the players. Nothing much will change. Obviously as captain, you will speak more. Naturally that would happen when you are leading the team,” Brathwaite told reporters at a virtual press conference in Dhaka.

Brathwaite was called on to lead the side after regular Captain Jason Holder and Vice-Captain Roston Chase, and eight other players, opted out of the series over fears of contracting the novel coronavirus.

“I still see myself as a leader despite not being a [regular] captain,” said Brathwaite.

“But now, we have some senior players around that can give guidance.

“I know the majority of the guys so I am familiar to speaking to them. I look forward to leading this team.”

In spite of his poor form — he made just 55 runs in four innings in December’s two heavy defeats in New Zealand — it was a natural progression for Brathwaite to take over the captaincy as he has already led West Indies in five of his 64 Tests.

“Leading a team, you want to win. My role here is to lead from the front, both as a captain and with the bat. It will be great to get the win,” he said.

Two of his previous five Tests as captain came in Bangladesh at the end of 2018 when West Indies lost both matches in the series.

Brathwaite scored just 22 runs in four innings as the Bangladesh spinners took all 40 wickets during the series. The opener, however, says they have done their homework this time around.

“You have to find ways to overcome challenges in international cricket,” he said.

“The spinners did well last time. We have reviewed what we could have done better. We have to execute and believe in ourselves, trust our preparations,” he said.

The absence of so many regulars has opened the door for a lot of fringe players, including uncapped batsmen Kavem Hodge and Shayne Moseley.

Yesterday the squad received an open letter from former Captain Clive Lloyd urging them to take advantage of the opportunity.

“You have a chance of cementing a permanent place in the West Indies team and not merely filling a gap,” said the 76-year-old.

“You have been chosen on merit. This is your destiny. It is your opportunity to fulfil it.

“This is a perfect opportunity to demonstrate your talents and skills to the world and prove to all and sundry that you’re not second-class cricketers.”

The first Test starts February 3 in Dhaka, with the second getting under way on February 11.

The West Indies begin their tour with a warm-up match on January 18 before playing a three-match One-Day International (ODI) series.

The first two ODIs will take place in Dhaka on January 20 and 22 with the final one-day game in Chittagong on January 25.

Trinidad batsman Jason Mohammed will lead the side in ODI series.

Main Photo: Kraigg Brathwaite plays a shot on the third day of the first Test cricket match between England and the West Indies at the Ageas Bowl in Southampton, southwest England in this July 10, 2020 file photo. (Photo: AFP)