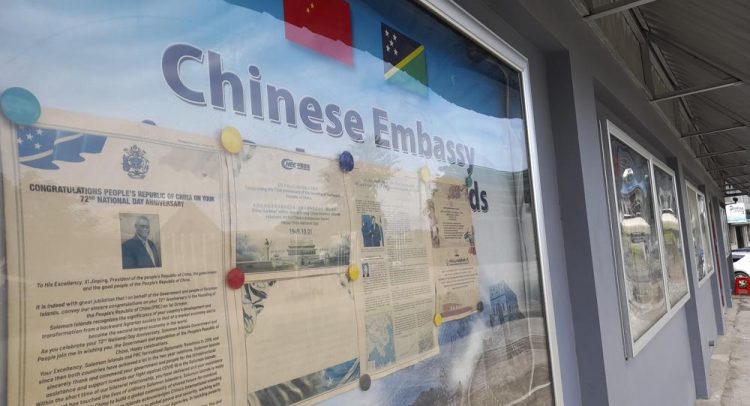 CANBERRA, Australia: (AP) — Australia and the United States are stepping up diplomatic outreach to the Solomon Islands after China signed a security deal with the South Pacific island nation that could lead to Beijing establishing a military presence there.

Australian Prime Minister Scott Morrison said Wednesday that his minister for International Development and the Pacific, Zed Seselja, had flown to the Solomon Islands the day before for talks with Prime Minister Manasseh Sogavare on the April 1 security pact the country agreed to with China.

Seselja said he had asked Sogavare to abandon the Chinese agreement.

“We have asked Solomon Islands respectfully to consider not signing the agreement and to consult the Pacific family in the spirit of regional openness and transparency, consistent with our region’s security frameworks,” Seselja said in a statement.

The trip came the same day that U.S. Deputy Secretary of State Wendy Sherman spoke with Solomon Islands Foreign Minister Jeremiah Manele about Washington’s plan to reopen an embassy in the capital, Honiara.

The announcement of reopening the embassy, which has been closed since 1993, came in February before the security pact came to light, but amid already growing concerns about Chinese influence in the strategically important country.

A Chinese military presence in the Solomon Islands would put it not only on the doorstep of Australia and New Zealand but also in close proximity to Guam, with its massive U.S. military bases.

At the time he announced the embassy’s reopening, U.S. Secretary of State Antony Blinken said the U.S. was seeking to increase its influence in the Solomon Islands before China becomes “strongly embedded.”

State Department spokesman Ned Price said the call between Sherman and Manele touched on “our joint efforts to broaden and deepen engagement between our countries,” in addition to the embassy plans, but gave no further details.

Chinese Foreign Ministry spokesman Zhao Lijian defended Beijing’s cooperation with the Solomons as being based on “the principle of mutual respect and mutual benefit” and in line with international law and international practice.

He added that other countries “should view this in an objective and reasonable manner, respect the sovereignty and independent decision of China and the Solomon Islands, avoid provoking confrontation and creating division in the region, and do something conducive to regional stability and development.”

According to a draft of the agreement, which was leaked online, Chinese warships could stop in the Solomons for “logistical replenishment” and China could send police, military personnel and other armed forces to the Solomons “to assist in maintaining social order.”

The draft agreement specifies China must approve what information is disclosed about joint security arrangements, including at media briefings.

The Solomon Islands government have said a draft was initialed two weeks ago and that it would be “cleaned up” and finalized soon.

The Solomon Islands government has said it won’t allow China to build a military base there and China has denied seeking a military foothold in the South Pacific, but the pact set off alarm bells among many Western nations.

Australia already has a bilateral security pact with the Solomon Islands and Australian police peacekeepers have been in the capital, Honiara, since riots in November.

Morrison said Australia was respectfully and directly communicating with the Solomon Islands on the Chinese security deal.

“They are a sovereign nation. I respect their independence and they will make their own decisions about their own sovereignty,” he said.

“What we have been doing is ensuring that they are fully aware of the risks and the security matters that are not only of concern to Australia but islands, Pacific nations across the Pacific,” he added.

Seselja said Australia also welcomed statements from Sogavare that it remains the Solomon Islands’ “security partner of choice, and his commitment that Solomon Islands will never be used for military bases or other military institutions of foreign powers.”

Morrison announced on Sunday that an election will be held in Australia on May 21. He now leads a caretaker government and must consult the opposition on any policy decisions.

“This is happening on Mr. Morrison’s watch – the warnings have been there for months, the draft agreement public for weeks – but he has failed to front up and explain how Australia is responding,” Wong said in a statement.

“We need to work with the Pacific family and allies to build a region where sovereignty is respected – and where Australia is the partner of choice,” she added.

FILE – A display case of photos is seen outside the Chinese Embassy in Honiara, Solomon Islands, April 2, 2022. Australia’s Minister for International Development and the Pacific Zed Seselja flew to the Solomon Islands on Tuesday, April 12, 2022, in a bid prevent a China military presence in the South Pacific Island nation.(AP Photo/Charley Piringi, File)