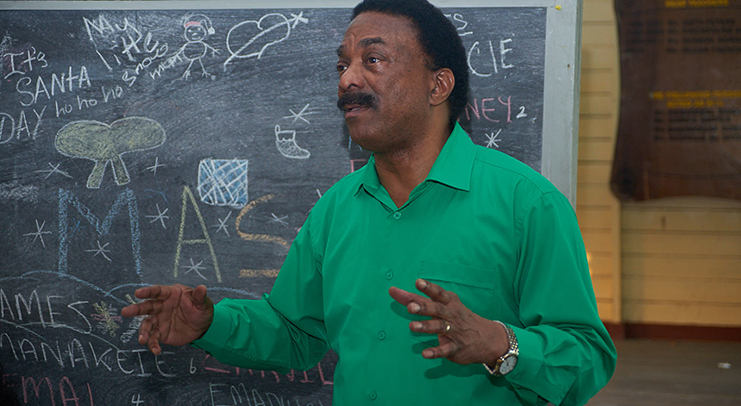 SCORES of A Partnership for National Unity (APNU) group representatives from the East Coast of Demerara (ECD) on Sunday matched the energies of their leaders by demonstrating an eagerness to defeat the opposition for the second time in the coming elections.

Yesterday afternoon at the Paradise Primary School, stalwarts both young and old met with Attorney General and Legal Affairs Minister Basil Williams; Minister within the Ministry of Public Health Dr. Karen Cummings and Chairman of Region Four Genevieve Allen.
This represents the very first party meeting of the coalition since the outcome of the no-confidence motion on Friday.

Although saddened by the decision of one former member of the coalition in his vote for the no-confidence motion, the men and women were buoyant that the fall out of one member does not represent the views of the majority.

Addressing them with opening remarks, Minister Williams likened the recent unfolding in the country to similar occurrences in the Bible, as he encouraged supporters to remain confident.

“Our government did not fall or collapse, our government was betrayed! But Judas’ betrayal of Christ did not destroy Christ’s work; rather, it enforced his disciples and followers to continue his teaching, making Christianity one, if not the world’s biggest religion,” the minister said.

“The betrayal of our government cannot destroy the way we have transformed Guyana in these three short years, restoring the hope of the Guyanese people; the rule of law; cleaning our economy of bad money, corruption and uncontrollable crime. We the PNCR, APNU+AFC disciples and followers must also continue the good works to win the next election for all Guyanese!”
His words of fortitude were met with a consensus of applause from many who later stood up individually to encourage the same to supporters in their communities and elsewhere.

PRESIDENT HAS BIG PLANS
The legal affairs minister also assured party members that their leader, President David Granger, though seeking treatment for his illness is still at the helm of the country.
“The President has big plans and projections for this future with him being President of Guyana,” he assured.

UNITY IS KEY
For her part, Minister Cummings took the angle that although the opposition’s current efforts are aimed at destabilising the government, the coalition’s unwavering support may very well result in a larger victory than before.
“Though we cannot understand because our minds are finite, we give way to infinite wisdom above. So, it might be a blessing in disguise. For some who were complacent, maybe it’s a wake-up call. But aluta continua, the struggle continues!
Forward ever, backward never… Jagdeo needs to be beaten [and not] not by a one seat this time,” she said.

Meanwhile, Allen in recounting her experience, similarly reasoned: “When it happened, I’ll tell you what comforted me. I went to the Bible with Joseph’s story after he was stoned by his brothers where he was dumped into a pit; where he was dumped into prison and out of that prison he became a prince. When his brothers came to him and they begged forgiveness, he said: ‘man meant it for evil but God meant it for good’.”
She further urged the gathering to put all their efforts into supporting their coalition so that unity is no longer rhetoric, but a reality.

ELECTIONS MODE
The leaders reminded their supporters that with only some 12 weeks ahead, it is time for them to get into “election mode” by campaigning for a government which has and will continue to represent them, devoid of bias.

The groups needed little persuasion to agree to the same as some stood up to recall what they referred to as “23 years of hardship” under the People’s Progressive Party/Civic administration.

Williams also shone light on the history of the campaigns of the opposition which he noted were made about race rather than about the democratic process of citizens’ right to decide for themselves.

“We have more to gain by winning,” he insisted. “We will continue working with all the Guyanese people, including our Indo-Guyanese brothers and sisters and we will defeat Jagdeo and his cronies if they come to us as a nation with that type of politics.”
Williams reminded too that the years of the PPP “Phantom” death squad which targeted many in the ECD region were barbaric and will never be repeated under the coalition.
Other matters the members discussed were their strategies to win the upcoming elections, while some in the audience raised suggestions regarding the involvement of youths and others ready to play a greater role in the party.

Both of the ministers, along with Allen took note of the suggestions with their indications that those pertinent would be acted upon swiftly.

“We are upbeat, we are confident, we have a good track record in only three years and we are going to win the next elections!” Williams affirmed, while reminding: “The most important thing for us at this time is unity.”

The Latest: 29 killed in attack in Afghanistan’s Kabul