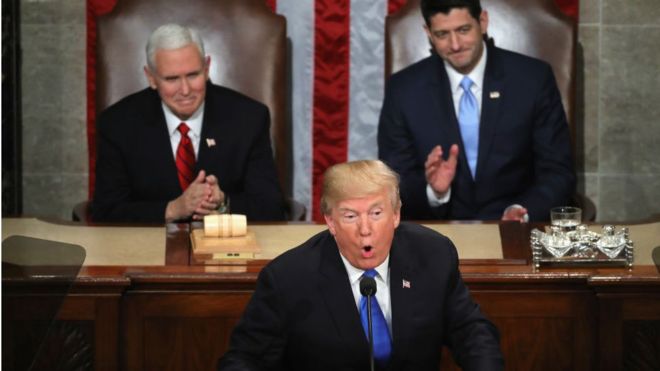 What did Trump say that matters to business in Asia? 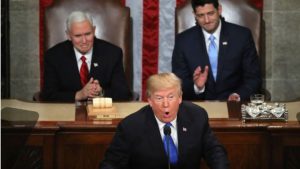 This would have been the part of his State of the Union speech that Beijing will have likely paid the most attention to (oh, and the part where he lumped the Chinese as a threat to American values along with terrorists, rogue regimes and Russia).

Some representatives of the Asian business community have told me that they were relieved he didn’t use the occasion to announce a trade war with China – which many had thought he might.

“He talked about American intellectual property protection, but didn’t talk about China in that context,” Deborah Elms, vice-chairman of the Asian Business Trade Association tells me.

“The system was sort of primed for him to announce something… but that’s not to say a trade war may not be coming in the future.”

You can see just how important China is to this White House from the statement released a day before the State of the Union address.

It outlines some of the Trump’s administration’s efforts to curb the world’s second largest economy. And last week Trump also slapped tariffs on solar panels and washing machines aimed at China and South Korea.

China could respond in kind (as I’ve written about before) but that sort of tit-for-tat retaliation won’t be good for the US, China or the global economy.

“If there are more tariffs imposed on Chinese imports it will hurt American consumers by raising prices of goods and reducing their buying power,” Ira Kalish, chief economist of Deloitte Touche Tohmatsu told me.

“But it will also reduce Chinese exports and hurt Chinese employment. You could wind up with a reduction in growth of Trans-Pacific trade and slowdown in economic growth on both sides of the pacific. ”

Infrastructure investment was also another key focus of the president’s speech – an area Asian companies and governments could see as an opportunity.

“Asian sovereign funds could allocate some of their funds to investments in US infrastructure, because they see it as a safe market,” says Tony Nash, chief executive of data analytics firm Complete Intelligence.

Trump is looking to bump the value of infrastructure spending to $1.5tn (£1.05tn) from a previously stated $1tn – but there are no specifics yet on how that might happen.