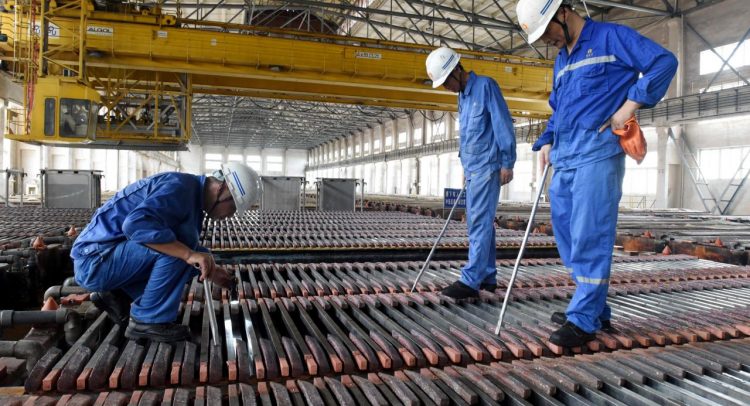 China’s copper producers and traders are riding an unexpected surge of business that has pushed physical prices to their highest in nearly two years as fabricators rush to buy refined metal to avoid import tariffs on scrap that kick in on Thursday.

The buying spree took off after Beijing announced two weeks ago it would hit $16 billion worth of U.S. imports, including scrap metal, with duties of 25 percent from Aug. 23 in retaliation for a similar move by Washington.

The United States is one of China’s biggest copper scrap suppliers.

The surge has given short-term relief to the world’s top market for the metal, often taken as a bellwether for the health of China’s economy and dubbed “Dr. Copper”, as demand growth had slowed just as a wave of new capacity was due to start up.

Physical copper premiums in China SMM-CUYP-CN jumped to as high as $91 a tonne this week, the most since November 2016, and are up 13 percent in the past two weeks alone. Five weeks ago the premiums were languishing near 10-month lows.

The premiums for physical deliveries are paid by Chinese copper importers on top of benchmark London Metal Exchange futures prices CMCU3, which have fallen by around 18 percent since hitting a four-year high on June 7.

Three traders attributed the spike to tighter supply of scrap copper, as Beijing also continues a campaign against foreign waste to stop being seen as a dumping ground for the world’s garbage.

“Some people who use scrap are turning to cathode, especially cheap African cathode,” said a trader based in Hong Kong. Democratic Republic of Congo and Zambia are two of the world’s top copper producers.

Cathodes are refined copper typically processed into rod and wire and used in infrastructure and construction.

A profitable arbitrage window to import copper into China has also increased premiums, adding momentum to a typical move as benchmark futures prices fell due to concerns that the trade row will hurt demand for industrial metals.

Copper inventories in warehouses monitored by the Shanghai Futures Exchange CU-STX-SGH have fallen by more than 40 percent since end-June, further boosting premiums.

The buying is also a boost for copper producers including Aluminum Corp of China (Chinalco) [ALUMI.UL], which are together set to launch around 1 million tonnes per year (tpy) of capacity this year, equivalent to 10 percent of China’s annual demand for the metal, with most of it starting up in the second half.

Chinalco fired up a 400,000-tpy smelter project in the southeastern province of Fujian at the end of June, although it has yet to announce the start of commercial production. Lingbao City Jincheng Metallurgy Co is launching a 100,000-tpy copper project in Henan.

Concerns had grown that the flood of capacity would hit a saturated market amid tepid demand and weak economic indicators in China, whose fixed asset investment in January-July expanded at its slowest in records going back to 1996.

“Our production and sales are estimated to decline by 8 percent in August compared with the previous month,” said an executive with a Chinese copper tube manufacturer, which mostly supplies factories making air-conditioning units.

Woodmac’s Zhou forecasts that China’s overall copper consumption growth will halve to 2 percent this year, down from 4 percent in 2017.

Comprehensive Disaster Management is special topic on Working for You on Wednesday, August 22