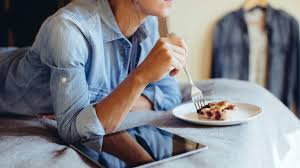 What to Do When Anxiety Is Driving You to Overeat 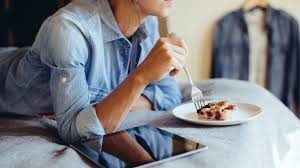 In the moment, a snack can seem like just the thing to stave off boredom, loneliness, depression or even anxiety. Sometimes it’s an occasional bout of emotional eating; other times, stress or even an anxiety disorder can fuel overeating.

Stress unleashes the hormone cortisol, which can whet your appetite. And eating actually does make you feel better—at least for a little while.

“Food can give us the same type of reward and pleasure that even drugs will,” says Melissa Majumdar, a registered dietitian and spokesperson for the Academy of Nutrition and Dietetics.

Munching can also serve as a distraction from whatever’s really bothering you.

But eating to quell anxiety—rather than hunger—isn’t a winning strategy. It sets you up for more eating and possibly weight gain, not to mention a bout of beating yourself up about all that snacking. Meanwhile, the underlying issues persist.

Whether you have an anxiety disorder or you’re facing ongoing stress in your life, a few simple tips can help tame anxiety eating.

It’s not the carrots and the broccoli that people tend to go for when they’re anxious. It’s anything packed with sugar or fat. You’re probably not likely to overdo it on something like grilled chicken breast, says Majumdar.

Sugary and fat-filled choices can numb emotions, but they also spike your blood sugar before sending it back into the trenches. Then you can feel hangry all over again; you’re on a collision course with more emotional eating.

Instead of Oreos and potato chips, aim for a balance of protein and fiber, since they are digested more slowly for “more of a sustained, gradual increase and decrease of blood sugar,” says Majumdar.

Because snacks like crackers can be a trigger for some people causing them to devour an entire box, she likes to steer people toward sources of carbs like berries and melon. Pair them with hard-boiled eggs, low-fat Greek yogurt or cottage cheese for protein, she says.

The longer you go without eating, the more likely you are to overeat, whether you’re anxious or not.

Instead of over-filling yourself at one sitting, eat balanced meals and snacks every three to four hours. Eating regularly like this will help you control your portion sizes and limit the urge to eat out of anxiety. “The goal is to feel satisfied and not turn to food,” says Cabrera.

Mohammed bin Salman: Only death can stop me from ruling