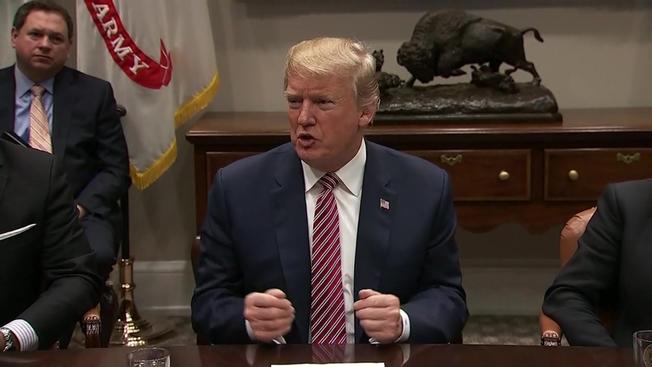 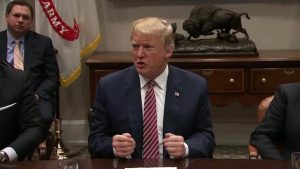 The White House indicated on Thursday that the federal government could come up with the money to fund as many as a million teachers being trained and armed with guns across America in a controversial attempt to keep schools safe from more mass shootings.

This followed repeated assertions from Donald Trump during earlier meetings at the White House, as well as in presidential tweets, that his response to the school massacre in Florida last week is to arm teachers and sports coaches.

It would be a “great deterrent” to killers, he said.

Trump insists on arming teachers despite lack of evidence it would stop shootings
Read more
At the White House press briefing on Thursday afternoon, Raj Shah, deputy press secretary, was asked if it was practical to expect teachers to carry concealed handguns to protect their students from shooters.

“When you have a horrific situation, what you think and do not think is practical can change,” Shah said.

Teachers’ unions have expressed shock and skepticism that any such plan could be feasible or effective.

But at a meeting at the White House with state and local officials early Thursday afternoon, Trump talked of paying bonuses to some teachers, providing “highly adept people, people who understand weaponry, guns … [with] a concealed permit”.

He suggested paying bonuses to armed, trained teachers, suggesting that “10, 20, 40%” of teachers could be qualified to do so, especially retired military personnel.

“I want my schools protected just like I want my banks protected,” he said.

The White House was later challenged that 40% of America’s teachers being given a bonus of, for example, $1,000, would mean $1bn being distributed to a million of them.

“Do you really think that’s too much to pay for school safety?” Shah responded. Shah said Trump would soon be talking to members of Congress about legislative and budgetary proposals.

Trump had earlier appeared to speak out against the kind of “active shooter drills” that are becoming the norm in many schools.

Furious Florida survivors assail NRA and politicians and urge action on guns
Read more
“Active shooter drills is a very negative thing … I’ll be honest with you. If I’m a child, I’m 10 years old and they say … ‘We’re going to have an active shooter drill,” I say ‘What’s that?’ ‘Well, ‘People may come in and shoot you’ … I think that’s a very negative thing to be talking about, to be honest with you. I don’t like it. I’d much rather have a hardened school,” he said.

But Shah explained that it was the frightening name the president disliked, not the drills themselves, and was in favor of calling them a safety drill.

He confirmed that Trump is considering supporting a rise in the age limit for purchasing an assault rifle to 21, but does not support banning assault weapons for US civilians outright. Students who survived the shooting at their high school in Parkland last week quickly began a fierce campaign calling for that measure.

In contrast to the combative tone coming from the administration, the Parkland mayor, Christine Hunschofsky, addressed safety and mental health in her meeting with Trump on Thursday, and then alluded to the assault rifle used by shooter Nikolas Cruz in last Wednesday’s massacre, saying: “In the end, how did somebody like this person get access to that kind of firearm?”

At an emotional session at the White House on Wednesday, the US president held a listening session with survivors of last week’s Florida school shooting and others affected by gun violence, telling them that armed teachers and school coaches “could very well end the attack very quickly”.

On Thursday, Trump tweeted: “20% of teachers, a lot, would now be able to … immediately fire back if a savage sicko came to a school with bad intentions. Highly trained teachers would also serve as a deterrent to the cowards that do this.”

Trump said having so-called gun-free zones around schools created a situation for school shooters like “going in for the ice cream”.

At Wednesday’s meeting, Nicole Hockley, whose six-year-old son, Dylan, died at Sandy Hook elementary school in Newtown, Connecticut, in 2012, spoke out against arming teachers. “I would rather arm them with the knowledge of how to prevent these acts from happening in the first place,” she said.

Randi Weingarten, president of the American Federation of Teachers union said in a statement: “Anyone who wants guns in schools has no understanding of what goes on inside them – or worse, doesn’t care.”

Barack Obama weighed in on Thursday, tweeting: “Young people have helped lead all our great movements. How inspiring to see it again in so many smart, fearless students standing up for their right to be safe.”