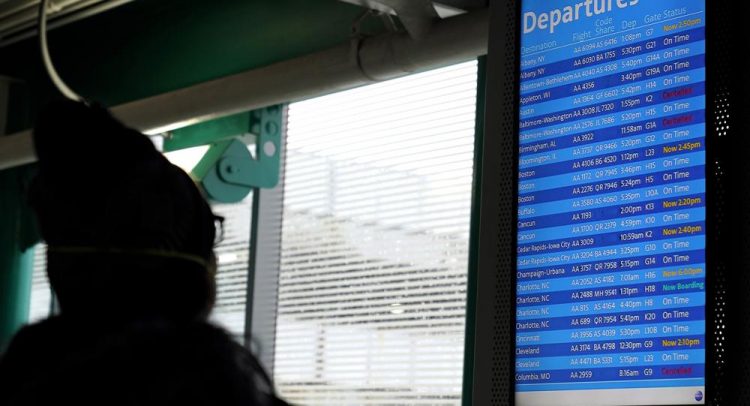 NEW YORK (AP) — Hundreds of flights were cancelled Wednesday as the omicron variant creates havoc both for travelers and for airlines that are having to cobble together flight crews as pilots, flight attendants and ground crews become infected or are exposed to others who have been.

More than 850 flights were cancelled by midday Wednesday and that number has ticked higher throughout the day, according to data from the flight-tracking website FlightAware. There were nearly 1,300 cancellations for flights entering, leaving or inside the U.S. Tuesday, and about 1,500 on Monday.

Cancellations began to spike the day before Christmas during what is already a buzzing pace for airlines this time of year.

Delta, United and JetBlue have all said that the omicron variant was causing enough staffing issues that flights were cancelled.

SkyWest led U.S. carriers with 195 cancellations, followed by United with 158 and Delta with 103. SkyWest, a regional airline based in Utah, has suffered an elevated level of cancellations after severe weather hit several of its hubs, but it’s reporting the same staffing issues due to COVID-19.

The Pacific Northwest was slammed with cold and heavy snow over the weekend. Among U.S. airports, Seattle-Tacoma had the highest percentage of incoming and outgoing flights cancelled Wednesday, according to FlightAware.

Omicron has intensified already significant staffing issues for airlines, which winnowed workforces in 2020 as air travel collapsed, only to be broadsided when vaccination rates jumped and millions of people felt comfortable flying again this year.

That could translate to travel headaches for hundreds of thousands of people if cancellations maintain the current pace into the weekend. The Transportation Security Administration expects the Monday after New Year’s will be one of the busiest days of the holiday season.

FILE – A traveler checks an information screen for flight status at O’Hare International Airport in Chicago, Ill., Tuesday, Dec. 28, 2021. Hundreds of flights were cancelled Wednesday as the omicron variant continues to create havoc both for travelers and for airlines who are having to cobble together flight crews as infections rise among pilots, flight attendants. (AP Photo/Nam Y. Huh, File)