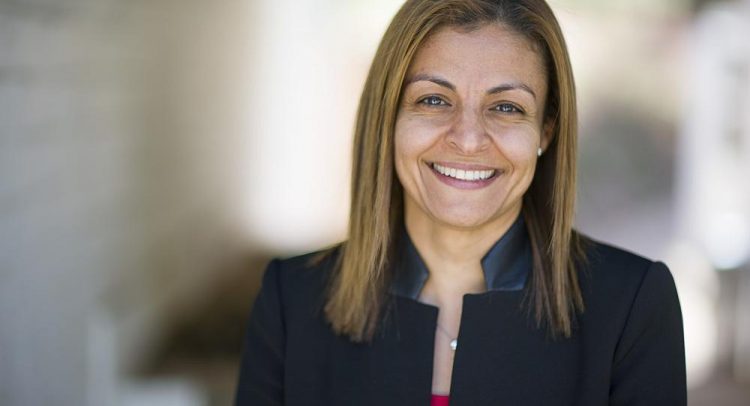 The non-profit that operates Wikipedia, one of the world’s most popular websites, has a new CEO, Maryana Iskander (and yes, she has a Wikipedia page ). She’ll take over at the Wikimedia Foundation in January and says that her priorities are diversifying Wikipedia’s volunteer writers and editors and promoting the foundation’s mission of advocating for access to information.

Iskander’s background spans continents and fields. She has led South African non-profit Harambee Youth Employment Accelerator, which focuses on helping young Africans find jobs, since 2013. She has also been COO of the Planned Parenthood Federation of America, worked at consulting firm McKinsey and clerked for the U.S. Court of Appeals.

She recently talked with The Associated Press about her plans for the volunteer-managed online encyclopedia, which launched in 2001.

Q: What attracted you to Wikipedia?

A: It’s hard to imagine who wouldn’t be interested. The job profile starts with this extremely striking statement about the fact that knowledge belongs to all of us. The idea that anything belongs to all of us is really quite revolutionary. It’s like we’re living in a world in which increasingly most things don’t feel common and don’t feel shared. And the chance to be part of an organization that I think has that as a core value was hugely appealing and connects to a lot of the things that I’ve done in my career before.

Q: Wikipedia is famously created and edited by its army of volunteer contributors. What do the Wikimedia Foundation’s 500-plus employees do?

A: The foundation itself enables the actual platform and the software and the technology. It’s a big operation to be able to do that. We also provide support to these communities all over the world in different forms because their needs are very different. We do a huge amount of policy and advocacy work.

Q: What are the biggest challenges for Wikipedia?

A: Most of the content on Wikipedia comes from the global north. It doesn’t represent the full sum of human knowledge. How do we get more content both about and from people in the global south?

A second priority is that most of the issues that Wikipedia faces are not Wikipedia’s alone. And so how do you think about building ecosystems with other partners (to deal with) online harassment or misinformation. None of these are things that a single organization or a single platform can solve on its own.

Q: Wikipedia contributors are heavily male and most often come from Europe and North America. How do you want to involve more women and people from other countries?

A: Every country and frankly, language community, is different. But one of the things that we’ve learned about how Wikipedia has increased its presence in Nigeria is that it’s important to first try to raise awareness about Wikipedia, so that people have an understanding of it as a resource. Then people will be more interested in coming in to be contributors.

Q: Wikimedia has an annual budget of over $100 million. There is some criticism that the foundation has plenty of money to fund its expenses and yet is begging its users for money. Is that donation ask something you think is important and going to continue?

A: Wikipedia is the only top 10 website in the world operated as a not-for-profit, so it’s trying to deliver a set of services on a fraction of the budget of the big tech platforms. I think our intent is never to harass readers or users. But in fact, what we see is that lots of people are very happy to make what is usually a pretty small contribution in support of something that they use and find valuable. And that is important because it keeps us from needing to sell personal information or sell ads or do the things that would compromise the neutrality and integrity of the platform.