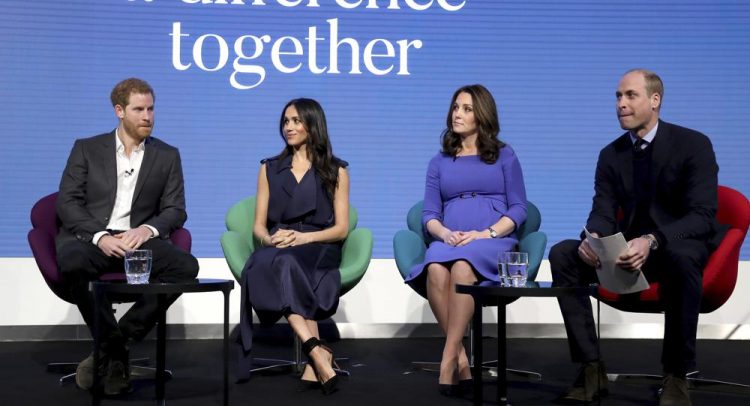 LONDON (AP) — They were once so close.

Princes William and Harry grew up together, supported each other after their mother’s untimely death and worked side by side as they began their royal duties — two brothers seemingly bonded for life by blood, tradition and tragedy.

But those links are now painfully strained as William sits in London defending the royal family from allegations of racism and insensitivity made by Harry and his wife, Meghan, from their new home in Southern California.

Royal watchers will be looking closely for any signs of a truce — or deepening rift — on Thursday when William and Harry unveil a statue of their mother, Princess Diana, on what would have been her 60th birthday. The event in the Sunken Garden at London’s Kensington Palace will be their second public meeting since Harry and Meghan stepped away from royal duties over a year ago.

People shouldn’t expect a quick resolution of the conflict because the two men are fighting over core beliefs, says Robert Lacey, a historian and author of “Battle of Brothers: William, Harry and the Inside Story of a Family in Tumult.” William is defending the monarchy, and Harry is defending his wife.

“It’s a matter of love versus duty, with William standing for duty and the concept of the monarchy as he sees it,” Lacey said. “And then from Harry’s point of view, love, loyalty to his wife. He is standing by her. These are very deeply rooted differences, so it would be facile to think that there can just be a click of the fingers.”

But finding some sort of rapprochement between the princes is crucial to the monarchy as Britain’s royal family seeks to appeal to a younger generation and a more diverse population.

When Harry married Meghan just over three years ago, it seemed as if they would be central figures in that next chapter of the royal story.

The Fab Four — William and his wife, Kate, together with Harry and Meghan — were seen as a cadre of youth and vigor that would take the monarchy forward after the tumultuous 1990s and early 2000s, when divorce, Princess Diana’s death, and Prince Charles’ controversial second marriage to Camilla, the Duchess of Cornwall, cast doubt on the future of the institution.

Meghan, a biracial former TV star from Los Angeles, was expected to be an important part of that effort, with Black and Asian commentators saying that for the first time there was a member of the royal family who looked like them.

But the words “Fab Four” were quickly replaced in tabloid headlines by “Royal Rift.”

First, their joint royal office was dissolved. Then, Harry stepped away from royal duties and moved his family to North America in search of a more peaceful life. William pressed on with royal tasks, including goodwill events like accompanying his grandmother to Scotland this week to tour a soft drink factory.

The relationship was further strained in March when Harry and Meghan gave an interview to U.S. talk show host Oprah Winfrey.

Harry confirmed rumors that he and his brother had been growing apart, saying “the relationship is ‘space’ at the moment” — though he added that “time heals all things, hopefully.” Harry also told Winfrey that his father, Prince Charles, didn’t accept his calls for a time.

And then came the real shocker. The couple revealed that before the birth of their first child, an unidentified member of the royal family had expressed concern about how dark his skin might be. Days after the broadcast, William responded, telling reporters that his was “very much not a racist family.”

But whatever their disagreements, out of respect for their mother, William and Harry won’t put their differences on display during the statue ceremony, said historian Ed Owens, author of “The Family Firm: Monarchy, Mass Media and the British Public 1932-1953,” which examines the royal family’s public relations strategy.

“We’re not going to see any acrimony or animosity between the brothers on Thursday,” Owens said. “I think reconciliation is a long way off, but nevertheless these are expert performers. Harry and William have been doing this job for long enough now that they know that they’ve got to put, if you like, occasional private grievances … aside for the sake of getting on with the job.”

Lacey believes William and Harry will ultimately reconcile because it is in both of their interests to do so.

Harry and Meghan need to repair relations to protect the aura of royalty that has allowed them to sign the lucrative contracts with Netflix and Spotify that are funding their life in California, Lacey said. If they don’t, they risk becoming irrelevant like the Duke and Duchess of Windsor, who were shunned by the royal family after the duke gave up the throne in the 1930s to marry an American divorcee. His brother, Queen Elizabeth II’s father, then became king.

“It’s very appealing, particularly in America, the idea that they rebelled against this stuffy old British institution,” Lacey said. “But there’s a point they can’t go too far, and they’re approaching that point.”

“On William’s side, it is impossible to go on ostracizing, boycotting the only members of the royal family who are of mixed race in a multiracial world of diversity,” he added.

The critical moment may be next year, when the queen celebrates her platinum jubilee, marking 70 years on the throne.

Under normal circumstances for these big occasions, the queen would want the whole family together on the balcony of Buckingham Palace, where the royals have traditionally gathered to wave to the public.

“Who’s going to be on the balcony at Buckingham Palace?” Lacey asked. “That family grouping has surely got to include Meghan and Harry and their two children, Archie and Lili, alongside their cousins, the children of William and Kate.”

FILE – In this file photo dated Wednesday Feb. 28, 2018, Britain’s Prince William and Kate, Duchess of Cambridge, right, sit with Prince Harry, left, and his fiancee Meghan Markle, as they attend the first annual Royal Foundation Forum in London. Under the theme ‘Making a Difference Together’, the event will showcase programmes run or initiated by The Royal Foundation. Links now seem strained between the brothers as William sits in London defending the royal family from allegations of racism and insensitivity. On Thursday July 1, 2021, William and Harry will together unveil a statue of their mother, Princess Diana, on what would have been her 60th birthday.(Chris Jackson/Pool via AP, FILE)