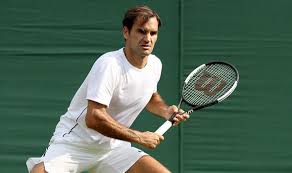 The Swiss was in imperious form as he continued the tradition of the defending men’s champion opening up Monday’s play on Centre Court.