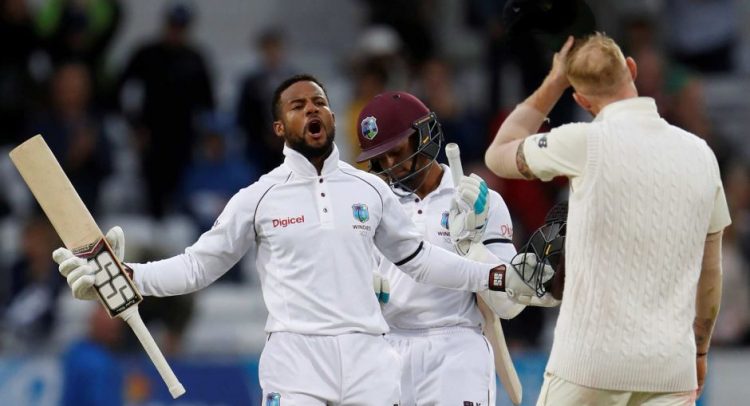 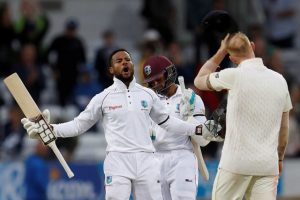 West Indies “A” survived a five-wicket haul from England Lions spinner Jack Leach to stumble to a two-wicket win in a nerve-shattering finale to the opening four-day “Test” at Trelawny Multi-purpose Stadium.

Victory gives West Indies a one-nil lead heading into the second match at Sabina Park in Kingston, which begins on Sunday.

West Indies “A” entered yesterday’s final day on 31-1, needing 75 runs for the win, but slow left-arm orthodox bowler Leach claimed 5-26 while bowling a tight line and length to rattle the hosts on a dry pitch that offered plenty of grip and turn to the spinners. Leach had previously snatched three wickets in the first innings.

And while Jomel Warrican won the man of the match award after his heroic exploits with bat and ball, it was Rahkeem Cornwall — scorer of a 12-ball 14 not out — who saved the day. His crunching four through cover off wrist-spinner Mason Crane hauled West Indies “A” over the line.

West Indies “A” Captain Kieran Powell made a second-innings top score of 30.

Floyd Reifer, the West Indies “A” head coach, said he maintained belief in his team despite spiralling from 80-3 to 98-8.

“Obviously, batting on the pitch was difficult in terms of [facing] the spinners, but I always had confidence in the guys to bring home the game. The positive start from yesterday [Tuesday] — the skipper and [opener John] Campbell gave us that flyer yesterday evening says a lot,” he told reporters in a post-match interview.

Left-arm finger spinner Warrican took eight wickets in the match, including a historic 7-33 in the second innings, and compiled 71 not out in the first innings. His career-best first-class knock was part of a 161-run ninth-wicket partnership with first-innings centurion Shane Dowrich that clinched the hosts a critical first-innings lead of 27 runs.

Wicketkeeper Dowrich scored a sensational 119 for his fifth first-class hundred, and his work behind the stumps was also good on a pitch which produced invariable bounce.

Aside from his batting effort yesterday, the giant off-spinner Cornwall grabbed 5-68 in the first innings and finished with eight wickets in the match.

The coach praised the team effort, while noting the significance of the individual contributions.

“The guys played well together as a team, though it was their first game together as a unit. Warrican played well with that vital innings and Dowrich got a hundred. Cornwall and Warrican bowled well, so all in all it was a very good team effort,” Reifer said.

England Lions Head Coach Andy Flower said the match was a spectacle, despite the batting surface heavily favouring the spinners.

“There weren’t that many spectators in but anyone involved in the game, for anyone watching, it was a great start to the series. The pitch was obviously very spinner-friendly, probably did a bit too much, to be honest. But it meant that the spinners could dominate, which they did do and we just needed a little bit more of a lead and we could have won the game,” Flower said.

Earlier, the West Indians continued from their attacking approach from the previous day and reached 51 before Powell tried to sweep off-spinner Liam Livingstone and top-edge a catch to Nick Gubbins behind square on the leg side.

Local boy Jermaine Blackwood (four) went next when he left alone a ball from Leach that slanted in with the angle instead of spinning away from the right-hander. To Blackwood’s dread the ball smashed into the stumps.

Shamarh Brooks (16) was trapped leg before wicker by Leach, while first-innings hero Dowrich (four) was bowled by the same bowler as the Englishmen’s comeback gathered momentum.

Left-hander Raymon Reifer (three) was given out caught close to the wicket by Haseeb Hameed off Livinstone as West Indies “A” fell to 91-6.

A lot rested on the shoulders of left-hand middle-order batsman Vishal Singh (17), but he succumbed to the pressure, mistiming a flick to the on-side for James Porter to catch at mid-on.

And things got even tenser when Warrican drove to leg break bowler Mason Crane who took a low return catch.

But Cornwall’s powerful blow through the off side off Crane had the West Indies staff and supporters letting out a collective sigh of relief.