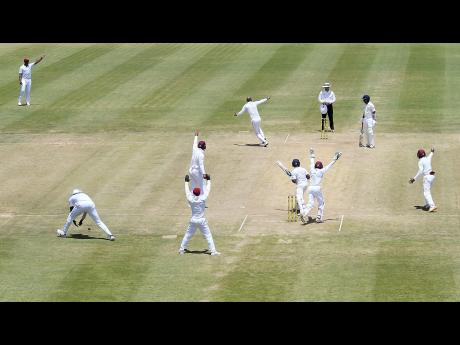 The Windies needed just 20 balls in the space of 13 minutes after lunch to emphatically crush Sri Lanka by 226 runs in the opening Test here yesterday and claim their first Test win over the Asian side in 10 years.

Scenting victory at lunch with the tourists tottering on 222 for seven in their second innings, the Windies wasted little time in grabbing the last three wickets for the addition of just four runs, to take a 1-0 lead in the three-match series.

All told, Sri Lanka lost their last seven wickets for 37 runs in their failed pursuit of an improbable 453 for victory.

“I’m extremely happy with the way we started this series. Credit must go to every individual who put an effort in,” an elated captain Jason Holder said afterwards.

“It wasn’t easy. The pitch was pretty tough at first for the bowlers especially but every bowler came in, really put up their hand and gave a really good effort.

“I must say credit to the batters as well. From the position we were in on the first day … I just felt it was a brilliant lower order contribution from the entire group and then we were able to come back out and back it up in the field in the first innings.”

Part-time off-spinner Roston Chase grabbed two of the three wickets to fall after lunch to end with four for 15 while leg-spinner Devendra Bishoo took the other, to finish with three for 48.

Opener Kusal Mendis had earlier completed his fifth Test hundred with a brilliant 102 but he was one of four wickets to tumble in the morning session at Queen’s Park Oval, as Sri Lanka collapsed from their overnight 176 for three.

The right-hander, resuming on 94, reached three figures in the third over of the morning when he whipped seamer Holder to the square boundary.

However, he was the first casualty of the day three overs later when he gloved a brute of a delivery from Gabriel that was angled in, straightened and lifted, for wicketkeeper Shane Dowrich to snaffle an easy catch head-high.

His dismissal set Sri Lanka back and they managed just 16 runs in the first hour as survival became the priority.

Nightwatchman Lahiru Gamage, yet to score at the start, faced 49 balls for his three before missing a googly from Bishoo in the third over following the drinks break and falling lbw.

Captain Dinesh Chandimal, who retired unwell the previous evening, resumed his innings on 15 and added a further 12 as he tried to hold up the Windies advance in a 23-run stand with wicketkeeper Niroshan Dickwella (19).

But in a dramatic final over before lunch, Chase knocked over both to put the contest firmly in the Windies’ corner.

Trump says he will stop 'war games' with S Korea