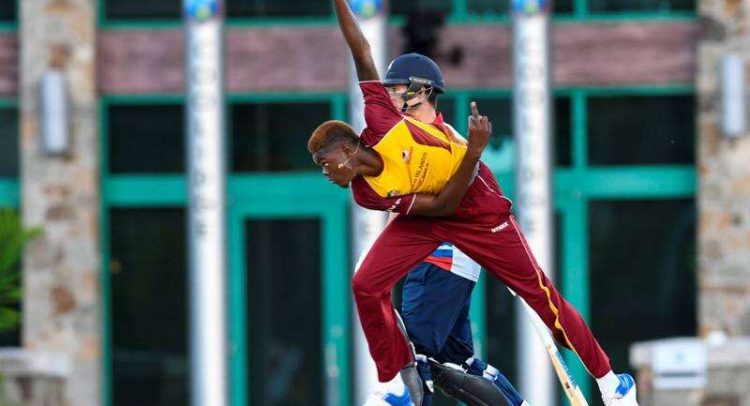 Windies implode in T20 opener ‘Down Under’

GOLD COAST, Australia (CMC) â€” A determined West Indies kept World champions Australia on their toes before losing the plot in the final over, as they crashed to a three-wicket defeat in the opening Twenty20 International of their two-match series here yesterday.

The contest at Carrara Stadium was in the balance with Australia starting the final over requiring 11 runs, in pursuit of 146 for victory, but West Indies did themselves no favours by dropping two straightforward chances, allowing the home side to get over the line with a ball to spare.

Left-hander Matthew Wade, who finished unbeaten on 39 from 29 balls, eased the tension considerably when he whipped left-arm pacer Sheldon Cottrell’s first delivery to the backward square boundary but debutant Raymon Reifer then floored a skyer running in from cover point, as Wade and Mitchell Starc (six not out) scampered a couple.

Wade pinched a single off the third and then watched as Starc skied to short third man where Kyle Mayers made a hash of the opportunity running around.

Starc made the most of the life, punching the penultimate delivery of the game to deep cover for two to hand his side the series lead.

Man-of-the-Match Aaron Finch had earlier laid the platform for the successful chase with a critical 58 from 53 balls, in a precious 69-run, sixth-wicket partnership with Wade.

Sent in, West Indies stumbled their way to 145 for nine from 20 overs, the left-handed Mayers top-scoring with 39 off 36 balls.

They lost Johnson Charles for three in the second over, the right-hander featuring in his first T20 International in nearly seven years, but Mayers lashed five fours and a six to help rebuild the innings in a 34-run, second-wicket partnership with Brandon King (12).

They gathered a healthy 53 from the first power-play before the runs dried up, leaving them on 68 for three at the halfway mark, Mayers bowled at the start of the 10th, missing a swing at seamer Pat Cummins (2-22).

West Indies laboured over the next five overs for 27 runs while losing Captain Nicholas Pooran, lbw to left-arm pacer Starc (3-35) for two and Reifer, top-edging a catch behind off pacer Cameron Green for a boundary-less 19.

Thankfully, Odean Smith arrived at number eight to belt a 17-ball 27 with three fours and a six which helped the visitors to 48 runs from the last five overs.

Fast bowlers Alzarri Joseph (2-17) and Cottrell (2-49) accounted for two early wickets in Australia’s reply, as the home side slumped to 21 for two at the end of the second over.

Finch, who counted half-dozen fours, put on 35 with opener Green (14) to give Australia control of the run chase before West Indies hit back, grabbing three wickets for two runs in the space of 13 deliveries to blow the game wide open.

Joseph bowled Green with a full-length delivery in the sixth over, debutant leg-spinner Yannic Cariah got Glenn Maxwell to miscue to cover without scoring in the following over, before seamer Jason Holder induced Tim David (0) into a pull which found Smith in the deep in the eighth over.

Finch steadied the innings in a sensible knock which contained half-dozen fours and had all but put the result to bed until the impressive Joseph got him to hole out to long on at the start of the 18th over, with a further 19 runs required from 18 deliveries.

B King lbw b Hazlewood 12

A Joseph c David b Starc 7

Did not bat: S Cottrell

M Starc not out 6

Did not bat: A Zampa, J Hazlewood