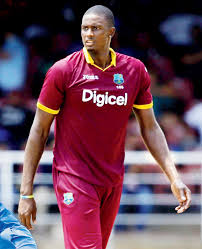 Windies look to wrap up series against Bangladesh

Bangladesh were on the short end when West Indies last won a Test series on home soil, a commanding 296-run result in St Lucia September 2014, giving the hosts a 2-0 triumph.

Jason Holder’s West Indies have the chance to inflict another such defeat on the same opponents when the teams square off at Sabina Park in Kingston starting today.

The hosts hold a 1-0 lead in the two-match Test series after crushing Bangladesh by an innings and 219 runs at Sir Vivian Richards Stadium in Antigua last week.

It was a harrowing defeat from a Bangladesh perspective, decimated for 43 first up, with fast bowler Kemar Roach cutting through the top order for five wickets in the innings. His pace partners Miguel Cummins and Holder cleaned up the rest.

Despite Roach’s absence due to injury, Bangladesh hardly fared any better in the second innings, toppled for 144. Fearsome speedster Shannon Gabriel claimed five, while Holder and Cummins again combined for the others.

Holder’s message was clear when he spoke to journalists during yesterday’s press session after morning practice at Sabina Park “It’s just about clinching the series now, we’ve got ourselves in position to clinch another series. It’s all to play for here at Sabina Park and the guys are really up for it,” he said.

But the West Indies captain is not expecting another lopsided affair.

“I definitely believe Bangladesh will come hard at us. Obviously what happened in the last match is not something that they are accustomed to. It’s a case where they don’t want to lose the series so I expect them to come pumped and ready to beat us.”

The West Indies were forced to make a squad change with young pacer Alzarri Joseph returning from an injury lay-off to replace the experienced Roach.

Holder said a final determination will be made this morning before start of play, but that spot in the eleven could be filled by either seamer Keemo Paul, who has batting potential, or Joseph.

“It’s just unfortunate what happened in Antigua, he [Roach] just had a slight hamstring strain and we just took the precaution of resting him and brought in Alzarri as cover. Kemar is obviously a big loss, he’s been doing well, especially with the new ball and also coming back and getting wickets,” said Holder.

He noted the grass-covered batting strip at Sabina, but insisted that a strong first-innings score whenever his team bats will set the ideal foundation.

“Whether we bat first or bowl first, it’s important we put up a really good first-innings total, it’s something we really stress upon in the dressing room.

“[The pitch] seems to have a bit of grass on it and it seems firm, so I expect the pitch to be a bit more consistent than probably the ones we played on previously,” he said while calling on the Windies batsmen to convert starts into bigger scores.

He also stressed the need for continued improvement in the field after no-ball violations and missed chances, left them with only a 1-1 result against touring Sri Lanka in the preceding three-Test series.

“It’s an improvement — last game we had fewer no-balls and dropped chances so it’s a matter of continuing in that vein. We probably won’t get a perfect game but that’s something we all strive for,” said Holder.

Bangladesh Captain Shakib Al Hasan had little to cheer about after the first-Test debacle, however, he projected confidence on the eve on the second match.

“Obviously, [we are] very disappointed. We knew that it’s going to be tough for us, but the way we performed was below par. Obviously we need to step up our game a bit. But the boys have been feeling very confident, though we didn’t do too well in the first Test match.

“It doesn’t matter if we bowl first or bat first, we need to start very well and then get that momentum. It’s a five-day match and we need to make sure we try to win most of the sessions and by doing that we can win the match,” Shakib told members of the media yesterday.

Wicketkeeper Nurul Hasan was the lone bright spark for Bangladesh in the first Test, cracking a counter-attacking half-century.

Shakib, who has plenty experience at Sabina after two seasons with Jamaica Tallawahs in the Caribbean Premier League, is banking on the rest of the batsmen raising their game on a pitch that he expects to offer a balance between bat and ball.

“I think there will be little bit more of pace and bounce — I’d say consistent pace and bounce — than the one we played on in Antigua. But I think it will be a true wicket, so if we can apply ourselves then we can do well.”

While crediting the West Indies pace attack, the Bangladesh skipper said plans are afoot to counter that threat.

“They have been bowling really well, and if you look at the [West Indies previous home] series against Sri Lanka, they were brilliant, and they’ve started off very well against us. We have to come up with some better plans to cope with their fast bowling.

Bangladesh are without the services of Shafiul Islam who suffered an ankle injury during training on Tuesday. It means Bangladesh are unable to rotate the fast bowling attack used in the Antigua loss, should they persist with three pacers.