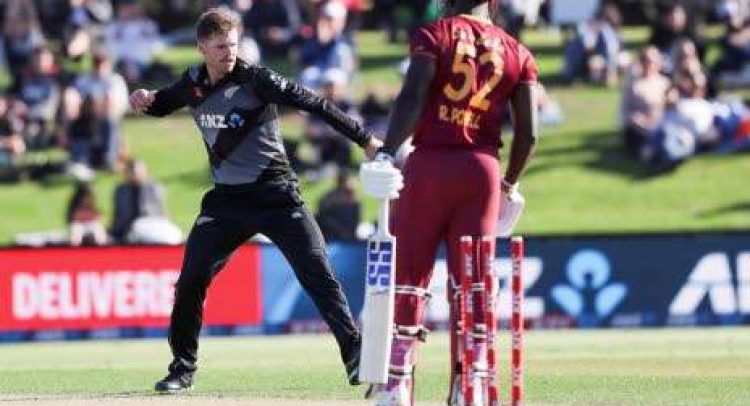 The Windies bowling again was far too inconsistent, and Phillips smashed 10 fours and eight sixes in a 51-ball assault to record the fastest T20I hundred by a New Zealander, setting up the Blackcaps for an imposing 238 for three from their allocation of 20 overs in the rain-affected match at the Bay Oval.

None of the West Indies’ batsmen could exhibit similar aggression against disciplined, if not threatening New Zealand bowling — a handful got starts and failed to carry on— and the Caribbean side limped to 166 for nine from their 20 overs.

Windies Captain Kieron Pollard hit the top score of 28, Keemo Paul indulged himself towards the end with 26 not out, Shimron Hetmyer laboured over 25, and opener Andre Fletcher and left-hander Kyle Mayers made 20 each, but promised much more.

The result meant that the visitors now trail 0-2 and cannot win the three-match series, which concludes today (2 am East Caribbean Time) at the same venue.

A wet outfield caused by rain delayed the start by 15 minutes and probably heavily weighed into the West Indies’ decision to defy the ground record and choose to field, rather than bat after they won the toss.

The inclement weather swayed the Windies from heeding the stat that suggests teams batting first at this venue have won all of the previous six finishes.

Left-arm pacer Sheldon Cottrell started well for West Indies with his first two overs costing only seven runs. But Pollard could find no other bowler to match his consistency and the Caribbean side leaked runs from early.

Oshane Thomas made the breakthrough, when he bowled Tim Seifert for 18 in the sixth over, the batsman playing on a scoop shot.

Left-arm spinner Fabian Allen had Martin Guptill caught behind down the leg-side for 34 in the seventh over, a dismissal that required video umpire Chris Brown to reverse the on-field verdict of umpire Shaun Haig — and New Zealand were 53 for two.

The match was still in the balance, but the Windies were not prepared for the assault from Phillips, a familiar foe, having played in the Caribbean Premier League for the past four years.

A short ball from Pollard was swatted to the deep mid-wicket boundary in the eighth over to get Phillips into stride and the batsman increased the tempo from there with Paul and Allen taking the brunt of the blows.

Paul, already on the receiving end from Guptill in the fifth over, was brought back for a second over —11th of the innings — and Phillips took a six and a pair of fours off the last three deliveries.

Allen, whose first two overs cost 11, then conceded three successive sixes and a four to Phillips in his third over — the 13th of the innings — before two balls into the next over, a rain delay lasting 23 minutes offered the visitors a temporary reprieve.

West Indies had no answer for Phillips and left-hander Devon Conway after the stoppage and the two manhandled the bowling to put on a world record 184 for the third wicket.

The Windies thought they had Phillips caught at long-off on 88 in the 17th over, but the delivery from Cottrell was called a no-ball because it was fast, full and high – and the batsman responded with a six and four off the last two balls of the over to get within touching distance of his hundred.

An untidy 18th over from Paul allowed Conway to reach his 50 from 31 balls, after he struck a four and six off the first two balls and a six and four off the fourth and fifth.

Next over, a short ball outside off-stump from Thomas was cut to deep point for a single and Phillips celebrated reaching 100 from only 46 balls — beating Colin Munro’s record by one ball.

A few members of the Caribbean side will remember Munro’s innings well because they played two years ago, when he set the mark against them at the same venue and the Blackcaps recorded their highest T20I total of 243 for five.

Pollard managed to remove Phillips with the penultimate ball of the innings, caught at point, but the damage was already done.

West Indies suffered an early setback, when Brandon King was bowled for a one-ball duck by a big in-swinger from Kyle Jamieson with the first ball of the second over.

Andre Fletcher was just getting into the swing of things, when he was run out by Phillips’ direct hit from point, going for a single in the fourth over.

Kyle Mayers, making his debut in place of pacer Kesrick Williams, came out to bat at four and played a few handsome strokes before he was brilliantly caught by Phillips at wide long-on off Jimmy Neesham in the ninth over.

And the writing was clearly on the wall for the Windies, when Vice-Captain Nicholas Pooran tried to belt left-arm spinner Mitchell Santner over mid-wicket and skied a simple return catch to the bowler in the 10th over.

The visitors were 72 for four, when Pollard strode to the crease with his side needing 166 from 63 balls and carried the past the 100 mark.

He slammed four sixes in his rapid-fire innings — three in succession in Santner’s third over —the 13th of the innings — but trying to hit the fourth, he was caught at long-off by his opposite number, Tim Southee, effectively ending the match as a genuine contest.