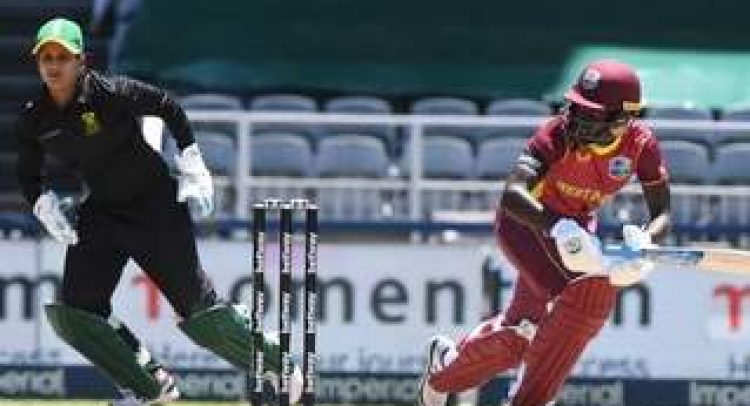 JOHANNESBURG, South Africa (CMC) — West Indies Women’s bid for a series success ahead of next month’s ICC 50-over World Cup fell flat here Sunday, as they crashed to a six-wicket defeat to South Africa Women in the decisive fourth One-Day International.

Choosing to bat first at the Wanderers, West Indies Women could only muster 174 with four balls left in the 50th over and the hosts hardly broke a sweat in chasing down the target in the 40th over, to complete a 2-1 scoreline in the four match series.

Andrie Steyn, in her first international in three years, top-scored with 52 off 73 deliveries while captain Sune Luus extended her excellent form with 47 off 80 balls.

Off-spinner Anisa Mohammed, standing in for the injured Stafanie Taylor, claimed two for 31 to inch to within one of 300 wickets in both white ball formats combined.

Left-hander Kycia Knight had earlier top-scored with 48 from 76 balls to follow up her half-century in last Thursday’s third game, while opener Deandra Dottin got a start with 36.

But they were the only two batsmen to pass 20 as West Indies Women’s batting flattered to deceive.

Shabnim Ismail finished with four for 44 and fellow new-ball pacer Ayabonga Khaka, two for 25, while leg-spinner Chloe Tryon chipped in with two for 12, as the Caribbean side lost their last eight wickets for just 70 runs.

“I think with the start we had, I think we should have gotten at least 250, 260 but unfortunately that wasn’t to be,” lamented Mohammed.

Rashada Williams notched her fourth-straight single-digit score when she fell for six in the fifth over at 19 for one but the Barbadian pair of Knight and Dottin stitched up the innings nicely in a 65-run, second-wicket stand.

Knight counted half-dozen fours while Dottin, already with a century in the series, struck three fours and a six in a 63-ball knock.

Ismail returned to prise out Dottin in the 23rd over for her second wicket and Knight added a further 20 for the third wicket with Hayley Matthews (8) before following in the 28th at 104 for three.

With two runs added in the 31st over, Matthews was brilliantly taken, one-handed at point by Laura Wolvaardt diving full stretch to her right, and the dismissal set in train the touring side’s decline.

In reply, Wolvaardt (23) and Tazmin Brits (20) put on 38 for the first wicket before falling within 18 deliveries of each other to leave the hosts on 56 for two in the 12th over.

But Steyn stepped up, stroking four fours in a measured innings and posting 88 in a third-wicket stand with Luus who counted three fours and a six.

The partnership put the game out of the visitors’ reach and even when Steyn and Luus followed each other in the space of 12 balls with six runs added, Chloe Tryon was able to punch four fours in an unbeaten 20 to steer her side home.

A generation will bear the scars of COVID — IMF