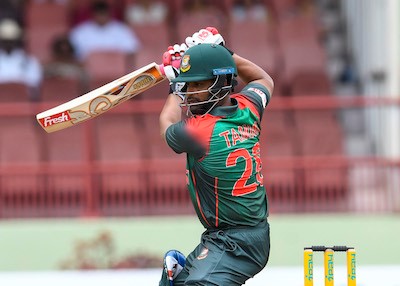 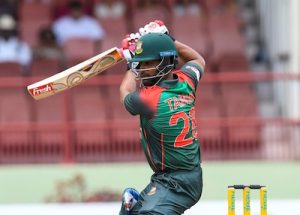 Hamstrung by a slow pitch, West Indies failed to fire, and Bangladesh, led by their most capped opener Tamim Iqbal and most capped bowler Mashrafe Mortaza, won the first One-day International by 48 runs on Sunday here.

With the Guyana National Stadium pitch in stark contrast to the surfaces they have exploited throughout the last 1 ½ months in Tests against Sri Lanka and this opponent, the Windies bowlers gained slow bounce and little movement, to the delight of the Bangladeshi batsmen, and Tamim collected his 10th One-day International hundred, an unbeaten 130, to anchor his side to 279 for four in 50 overs after they chose to bat.

The home team’s batsmen however, failed to adjust to the conditions and though there were periodic explosions from the bat, the resolve required was absent and they limped to 231 for nine in 50 overs with Mortaza using his vast experience to nurdle out 4-37 from 10 overs.

Before it was over, Shimron Hetmyer increased his value with a typically flambuoyant 52 from 78 balls that included five fours, veteran Chris Gayle gathered 40 before he was run out just when it looked like he was getting into gear, and Alzarri Joseph and hometown boy Devendra Bishoo, both finished on 29, providing some tail-end entertainment in an unbroken last-wicket stand of 59.

The result meant the visitors take a 1-0 lead in the three-match series which continues on Wednesday under the lights at the same venue before it concludes three days later at Warner Park in St. Kitts.

Apart from the pitch, West Indies were let down by sloppy fielding, and Tamim survived an early chance to plunder 10 fours and three from 160 balls to lead the charge for the tourists.

Four clear misses and a number of close calls blotted the Windies’ copy-book, paving the way for a 207-run stand between Tamim and Shakib-Al-Hasan, whose 97 from 121 balls included just six fours.

Entering the final stages, the host still seemed to have a rein on things with Bangladesh 211 for two, but Mushifqur Rahim arrived to blast a quick-fire 30 and put on 54 in 21 balls with Tamim to add meat to their team’s total.

West Indies failed to get a flourishing start from Chris Gayle and Evin Lewis to put early pressure on their opponents in the chase, and gradually Bangladesh tightened the screws with steady bowling.

Lewis was caught at mid-off off Mortaza for 17, slicing a drive in the ninth over and Shai Hope departed for six after he failed to review a dubious lbw decision when he played across the line to a delivery from Rubel Hossain in the 13th over to leave West Indies 41 for two.

Windies immediate past and immediate future stars Chris Gayle and Shimron Hetmyer came together and looked to be setting a foundation for a charge to the finish.

Gayle however, was run out in the 22nd over, when Hetmyer failed to respond to his call for a single to short third man, leaving West Indies 81 for three – and the innings lost momentum from this point onwards.

Hetmyer reached his 50 from 70 balls with a single to long-on off Mehidy Hasan Miraz’s off-spin in the 33rd over, but he nor the rest of the batting could demystify the Bangladesh bowling and crumbled before Joseph joined Bishoo for a little fun.

Earlier, West Indies conceded dropped Tamim on 17 and Shakib survived three chances, as they built a foundation for their side, after Jason Holder had Anamul Haque caught at second slip for a third-ball duck in the second over.

The Windies bowled with such discipline early on, Bangladesh got their first boundary, when Russell conceded the three in the ninth over to Tamim.

But this also precipitated a period in which the fielders failed the bowlers, as Ashley Nurse put down Tamim, on 17, at cover in the 11th over; Nurse too, bowling his off-spin, suffered, when an under-edge from Shakib, on 15, deflected from the thigh of wicketkeeper Shai Hope and flew past Chris Gayle at slip, and next over, Joseph had the same batsman, on the same score, dropped for a second time, when Gayle, again at slip, parried a shoulder-high chance.

The hosts did not get a sniff of a chance again until Shimron Hetmyer, fielding at fine leg, muffed a simple chance, when Shakib, on 84, top-edged a sweep at a delivery from Bishoo in the 39th over.

Bishoo however, was rewarded for his persistence, when he removed Shakib with Hetmyer this time holding onto a skier at deep mid-wicket from a top-edged slop/sweep in the 45th over.

Tamim reached his 100 from 146 balls, when he squirted a full-length delivery from Joseph into the covers and got a single in the next over before Bishoo had Sabbir Rahman stumped for three in the 47th over.

The figures of Russell and Holder were spoiled, when Tamim and Mushfiqur clattered a succession of boundaries off them, as Bangladesh added 69 from the final five overs.

But Russell got his own back, when he had Mushfiqur caught at fine leg by a diving Bishoo off the penultimate delivery of the innings.