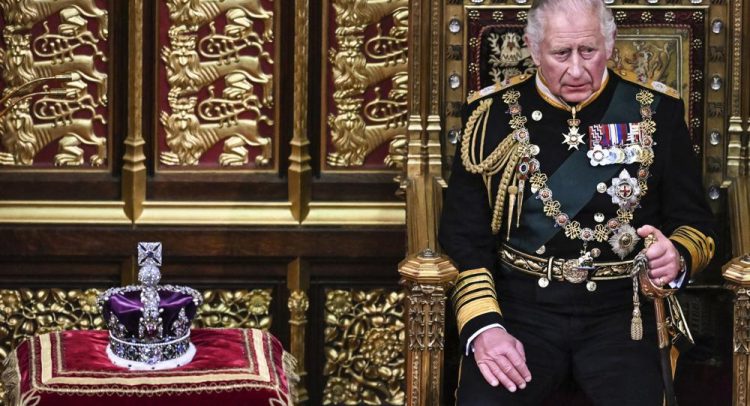 LONDON (AP) — Britain’s Conservative government set out its agenda for the next year on Tuesday with sweeping promises to cut crime, improve health care and revive the U.K.’s pandemic-scarred economy — but no new help for millions of Britons struggling to pay their bills as the cost of living soars.

Prime Minister Boris Johnson acknowledged that the coronavirus pandemic and the war in Ukraine had caused economic turmoil, but said “no government can realistically shield everyone from the impact.”

The government set out its legislative plans during a ceremony steeped in tradition, but without Queen Elizabeth II, who was absent for the first time in six decades.

The 96-year-old monarch pulled out of reading the Queen’s Speech at the opening of Parliament because of what Buckingham Palace calls “episodic mobility issues.” Her son and heir, Prince Charles, stood in, rattling through a short speech laying out 38 bills the government plans to pass.

The speech, which is written by the government, promised Johnson’s administration would “grow and strengthen the economy and help ease the cost of living for families.” There were plans to invest in railways, create a U.K. infrastructure bank and “level up” economic opportunity to poorer regions, as well as bills on education and health care funding.

Johnson said in a written introduction that the coronavirus pandemic and Russia’s invasion of Ukraine had created “huge disruptions to the global economy.”

“Where we can help, we will,” he said. But the speech included no immediate measures to relieve households struggling with soaring prices for domestic energy and food.

Many business groups and unions were disappointed.

The Confederation of British Industry was “encouraged” by the speech’s ambition, but the British Chambers of Commerce said that “unless the government takes immediate action on the economy (the measures) will come too late to help many firms.”

Christina McAnea, general-secretary of the Unison trade union, said the government had not “grasped the seriousness of the situation. Families are being forced into debt and are going hungry.”

Some of the planned laws appeared aimed at pleasing the government’s right-leaning voter base, including promises to seize “Brexit freedoms” by cutting red tape for businesses and overhauling financial services and data regulation now that Britain has left the European Union.

Law-and-order measures included a law to outlaw disruptive protest tactics favored by groups such as Extinction Rebellion, a proposal condemned by civil liberties groups. Human rights groups also criticized plans for a British Bill of Rights to replace current rights laws based on the European Convention on Human Rights.

Russia’s invasion of Ukraine, which has upended the European security order, was reflected in plans to beef up spying laws, introduce a U.S.-style “foreign influence registration scheme” and toughen money-laundering laws — though the mild-sounding measures are unlikely to eradicate London’s reputation as a hub for ill-gotten gains.

Despite rumors beforehand, there was no legislation to alter post-Brexit trading arrangements for Northern Ireland, a move that would worsen already tense relations between Britain and the EU. But the government hinted it could act, stressing the importance of the “internal economic bonds” between all parts of the U.K., a key theme for Northern Ireland’s British unionists.

Johnson’s Conservatives hold 358 of the 650 seats in the House of Commons, which should ensure easy passage of all its legislation. But it has been repeatedly derailed by ethics scandals and internal Conservative dissent.

The opening of a new session of Parliament came days after Johnson’s Conservatives suffered a drubbing in local elections across the U.K.

Johnson’s personal popularity has been hurt by months of headlines over parties in his office and other government buildings that breached coronavirus restrictions. The prime minister was fined 50 pounds ($62) by police last month for attending his own surprise birthday party in June 2020 when lockdown rules barred social gatherings.

Johnson has apologized, but denies knowingly breaking the rules. He faces the possibility of more fines over other parties, a parliamentary investigation into whether he misled lawmakers about his behavior and a possible no-confidence vote from his own lawmakers.

The parliamentary opening ceremony is a spectacular pageant steeped in the two sides of Britain’s constitutional monarchy: royal pomp and political power. Traditionally the monarch travels from Buckingham Palace to Parliament in a horse-drawn carriage and reads the speech to lawmakers from a golden throne, wearing a crown studded with 3,000 diamonds.

The queen has only missed two previous state openings during her 70-year reign, in 1959 and 1963, when she was pregnant with sons Andrew and Edward, respectively.

This year, Charles travelled to Parliament by car, rather than carriage, and did not wear the crown, which got its own cushioned seat. Charles was accompanied by his wife Camilla and his son Prince William, who is second in line to the throne.

Other symbolic elements were unchanged, including scarlet-clad Yeomen of the Guard and an official known as Black Rod who summoned lawmakers from the House of Commons to the House of Lords.

The ceremony takes place in the House of Lords, the unelected upper chamber of Parliament, because the monarch isn’t allowed to set foot in the House of Commons. Ever since King Charles I tried to arrest lawmakers in 1642 and ended up deposed, tried and beheaded, the monarch has been barred from entering the Commons chamber.

Photo: Britain’s Prince Charles sits by the The Imperial State Crown in the House of Lords Chamber, during the State Opening of Parliament, in the Houses of Parliament, in London, Tuesday, May 10, 2022. Britain’s Conservative government made sweeping promises to cut crime, improve health care and revive the pandemic-scarred economy as it laid the laws it plans in the next year in a tradition-steeped ceremony known as the Queen’s Speech — but without a key player, Queen Elizabeth II, absent for the first time in six decades. The 96-year-old monarch pulled out of the ceremonial State Opening of Parliament because of what Buckingham Palace calls “episodic mobility issues.” Her son and heir, Prince Charles, stood in, rattling through a short speech laying out 38 bills the government plans to pass. (Ben Stansall/Pool Photo via AP)