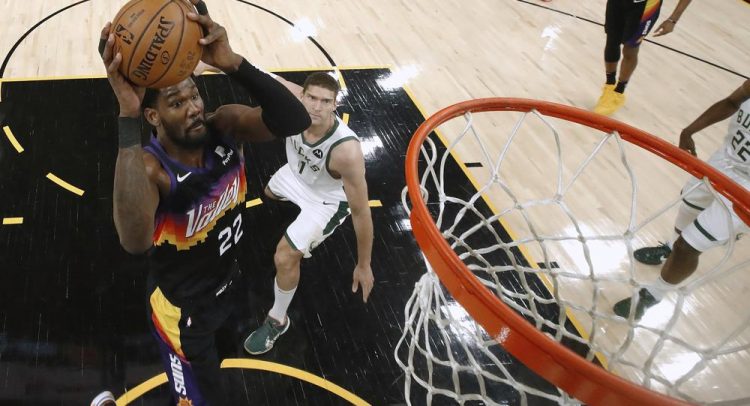 With Suns’ stars rolling, Bucks must be better in NBA Finals

PHOENIX (AP) — At their best, the Phoenix Suns have three players who can take over a game.

There’s Chris Paul and Devin Booker, breaking down defenses from the backcourt. Deandre Ayton has been a beast on the backboards and almost automatic as a shooter.

When all three are rolling the way they were in Game 1 of the NBA Finals, it’s easy to see why this could finally be the Suns’ championship chance.

“We have a real team,” Paul said Wednesday, “like a team where you can’t just key on one guy or two guys.”

The Milwaukee Bucks are supposed to have the same formula.

Yet just when Giannis Antetokounmpo came back, Jrue Holiday’s game went away. And if the Bucks are going to even the series Thursday night — and certainly if they have any hopes of winning it — they can’t afford bad nights from those two or Khris Middleton.

“I think in that perfect, ideal world, all three guys are hitting and clicking and everything is perfect,” Milwaukee coach Mike Budenholzer said. “But I’m guessing if you look at any team that has three great players or three really significant players, I bet a lot of nights it’s two out of three that they’re going and playing well.”

Antetokounmpo had 20 points and 17 rebounds in his return to the lineup, and it might be hard for Milwaukee to ask for much more so soon after a left knee injury that looked like it could have knocked him out far longer.

But the Bucks certainly can expect better from Holiday, who missed 10 of his 14 shots and finished with just 10 points in the Suns’ 118-105 victory. And though he’s long been regarded as one of the NBA’s top defensive guards, he wasn’t able to limit either Paul or Booker — though in fairness, maybe nobody could have Tuesday.

Holiday said he knows what he needs to do offensively.

Holiday averaged 26 points and 11 assists in the two victories that Antetokounmpo missed to end the Eastern Conference finals. He took at least 20 shots in both games, playing with an aggression without the two-time MVP that he hasn’t always provided with him in the postseason.

Budenholzer said that’s the challenge of getting three players going at once.

“So it’s harder than people realize,” he said.

It wasn’t any problem for the Suns. Paul had 32 points and nine assists, Booker added 27 points and six assists, and Ayton finished with 22 points and 19 rebounds.

Paul in particular wore the Bucks out in the third quarter by exploiting their coverage of the pick-and-roll whenever it ended up with a big man such as Brook Lopez or Bobby Portis switching out to defend him. The crafty and creative All-Star guard could either blow by those players off the dribble, or step back away from them to launch deep jumpers.

Milwaukee has faced that problem before. The Bucks never got a handle on the Brooklyn Nets until first James Harden and then Kyrie Irving were injured, or Atlanta’s Trae Young until he hurt his foot in the East finals.

The Bucks eventually got through those series and the Suns expect them to be better in Game 2 of this one.

“We talked about it this morning,” Suns coach Monty Williams said. “We have already started to prepare ourselves for the best Milwaukee effort that we’re going to see in the series. We’re ready for that.”

Antetokounmpo said he was having no problems with his hyperextended left knee. He wasn’t at his best in Game 1 — and certainly was not as effective as Ayton, who hiked his field goal percentage in the postseason to an absurd 71.1% — but is looking forward to the challenge of Game 2 before the NBA Finals return to Milwaukee this weekend for the first time since 1974.

Phoenix Suns’ Deandre Ayton (22) attempts a shot ahead of Milwaukee Bucks’ Brook Lopez (11) during the first half of Game 1 of basketball’s NBA Finals, Tuesday, July 6, 2021, in Phoenix. (Christian Petersen/Pool Photo via AP)