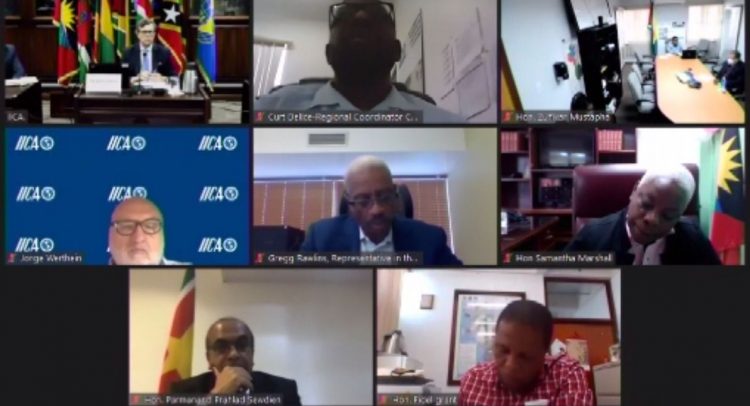 The ministers of Agriculture of the Caribbean analyzed the challenges associated with the current crisis triggered by the pandemic, shared their experiences with public policies, and discussed strategies for recovering from the emergency situation resulting from the tourism standstill and the weakening of the region’s economies.

The ministers agreed on the pending need to train small-scale producers, so that they may access funding opportunities, capitalize on technological advances, as well as broaden and improve synergies with the tourism sector. They applauded IICA’s efforts to support governments in developing strategies to build capacities, resilience and relationships with specialists.

The Director General of the Inter-American Institute for Cooperation on Agriculture (IICA), Manuel Otero, participated in the dialogue together with the ministers of Antigua and Barbuda, Dominica, Grenada, Guyana, St. Kitts and Nevis, and Suriname. The need to reduce the region’s food import bill by further developing the agriculture sector was a key issue discussed.

“Our vision is to increase the value added of agriculture in order to reduce the [food] import bill. I appreciate IICA’s efforts and its contributions to the Caribbean Community (CARICOM)”, stated Zulfikar Mustapha, Minister of Agriculture of Guyana.

“We are fortunate to have institutions that support a sector that is extremely important for food security and development in our countries. If CARICOM is able to improve its agriculture sector, the money can stay in CARICOM”, added Mustapha, noting that resources could be utilized to improve the region’s resilience to climate change.

During the meeting, Otero referred to what he described as “a false dilemma” between agriculture and tourism in the region.

“There is no need to choose between tourism and agriculture. We must choose more agriculture to generate more tourism, and we can strengthen tourism by taking advantage of all the benefits afforded by agriculture”, stated the Director General of IICA, who assured the ministers that IICA would make available its experiences in the field of bioeconomy, to assist them in capitalizing on the potential of residual biomass and biodiversity.

The ministers agreed on the need to strengthen agriculture as a way to provide the population with sufficient food and generate job opportunities. They also underscored the importance of strengthening technical and production capabilities as well improving access to funding opportunities, with constant support from international organizations such as IICA in the field of technical cooperation.

“For years, our efforts have primarily focused on tourism. More recently, however, and as a result of Covid-19, greater attention has been given to agriculture. We must focus on both areas, providing the tourism industry with fresh products and the population with job opportunities”, remarked Peter David, Minister of Agriculture, Forestry and Lands.

On the other hand, Fidel Neil Grant, Minister of Agriculture and Food Security of Dominica, expressed his country’s interest in “a more business-centered approach towards agriculture and fisheries. We lack sufficient production information for banks to disburse credit, and producers are poorly trained in this regard. We are working together with IICA to support them”.

During the virtual meeting, participants agreed that although it has generated a crisis, the pandemic has also afforded the possibility of resolving structural issues, such as the lack of training and the creation of new agricultural businesses in the region.

“Our countries are seeing a renewed interest in eating what is grown locally, which is breathing new life into agriculture. We don’t have to wait until the next pandemic to address challenges that have been dragging on for a long time. Under a holistic approach, we are strengthening producers’ skills in different areas, in order to build up the capacities of small-scale producers and reduce the import bill”, stated Alexis Jeffers, Minister of Agriculture, Lands, Housing, Cooperatives and Fisheries of St. Kitts and Nevis.

“All of the ministers agreed on the value of IICA’s contributions and expressed their support for IICA’s proposals to empower family farmers, including through remote assistance via mobile phones. There was also agreement on the need to care for water and soil resources”, remarked Director General Manuel Otero, who announced that, in partnership with Ohio State University, the specialized agency would soon be launching a hemispheric program on soil recovery and living soils.

Otero also expressed IICA’s interest in increasing support for the Caribbean in the areas of trade and agricultural health, and offered to set up a permanent forum to enable the region to continuously engage in dialogue amidst the current crisis, which calls for supranational solutions.

“We are committed to helping raise productivity levels in order to reduce food imports. IICA is increasing its support to foster food and nutritional security. Now is the time for resilience”, stated the Director General of IICA, which is mobilizing significant financial resources in the Caribbean.

One aspect highlighted was the need for greater integration within the region, whose countries have complementary competitive advantages that could make a difference in terms of bringing Caribbean agriculture to a new level.

“We must develop a very strong level of support to increase our agricultural production. We must take the lead in bolstering the relationship between countries in order to share knowledge and strengthen our positions”, stated Samantha Marshall, Minister of Agriculture and Fisheries of Antigua and Barbuda.

To support the transformation of Caribbean agriculture, IICA, in coordination with the different ministries, has implemented projects to enhance the sustainable growth of industries such as beekeeping, livestock and poultry farming, food production in protected environments and the incorporation of digital technologies.

“We acknowledge the vast potential of agriculture in Suriname. At present, the development of the coconut value chain and the strengthening of beekeeping are extremely important for our country. IICA has contributed to building capacities in many fields, such as climate-smart agriculture”, stated Parmanand Prahlad Sewdien, Minister of Agriculture of Suriname.

According to the ministers, IICA’s cooperation has been of crucial importance to agriculture in the region, and has become even more valuable at a time when the sector has gained new relevance.

“Your team has been very helpful in the field, providing small-scale farmers with supplies and medicines for livestock. This has enabled us to address the pandemic under a more structured approach”, stated Minister Marshall of Antigua and Barbuda.

“Most of the problems that limit agriculture in the Caribbean are of a supranational nature. We agree on the need to empower small-scale farmers, and the only way to empower them is by providing them with training in areas that shift the paradigm, such as the bioeconomy. We must move forward along this path by protecting and sustainably utilizing water and soil resources and, in particular, by channeling greater attention towards biotechnology”, concluded Otero.

Son and Kane to the rescue for lacklustre Spurs