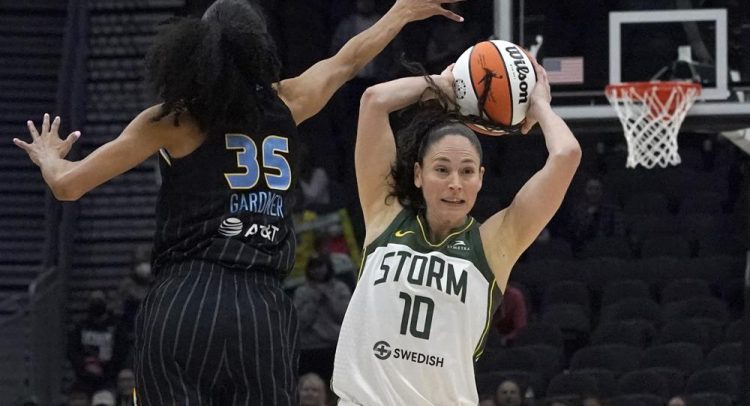 WNBA star Sue Bird says 2022 will be her final season

Seattle Storm star and five-time Olympic gold medalist Sue Bird announced Thursday the 2022 season will be her last playing in the WNBA.

The announcement by Bird, 41, ended any speculation about her future; she had acknowledged in February when she re-signed with Seattle that this would likely be her final season. She strongly considered retirement after last season before choosing to return for a 19th season as a player.

Bird’s announcement came a day before Seattle’s game at Connecticut. The Storm will close out their road trip on Sunday in New York, about 30 miles from where Bird grew up in Syosset, New York.

“As the season has gone, like I said, I pretty much knew, and then once I saw the schedule, and then once I started packing for this trip a little bit, I was like, ‘Oh, this is gonna be my last time playing in New York. My last time playing in front of my family and friends.’ And so that’s why the timing of this is what it is,” Bird said in a video posted by the Storm on social media.

“I just really felt strongly about announcing my retirement, saying it was my last year so I can share that with my family and my friends, all the people in New York who have watched me growing up so they can come and see me play for the last time in my home state. So I’m excited about that. It’s also bittersweet.”

Bird is a four-time WNBA champion, 12-time All-Star and the oldest player in the league. She has spent her entire WNBA career with Seattle since becoming the No. 1 draft pick in 2002 following her storied college career at UConn. This season is her 21st associated with the franchise although just her 19th playing after missing two seasons due to injuries. She is the league’s all-time leader in assists and the standard by which other point guards are judged.

Bird turns 42 in October and was on the cusp of stepping away a year ago, and when the Storm were eliminated by the Phoenix Mercury in the playoffs, fans chanted “One more year! One more year!” as she did an on-court televised interview.

Those cheers were egged on by Phoenix’s longtime star Diana Taurasi, Bird’s former college teammate at UConn and part of all five of those Olympic gold-medal runs.

In the end, the fans — and Taurasi — got what they wanted. Bird came back, for exactly one more year.

“Sue Bird is Storm basketball,” her WNBA team tweeted moments after Bird made her decision known. “Every moment, every memory has one constant. No. 10. It’s time for the final chapter.”

Seattle Storm guard Sue Bird (10) passes around the defense of Chicago Sky guard Rebekah Gardner (35) during the second half of a WNBA basketball game Wednesday, May 18, 2022, in Seattle. The Storm won 74-71. (AP Photo/Ted S. Warren)

Kalonji Clarke strikes late to give Sugar Boyz a point