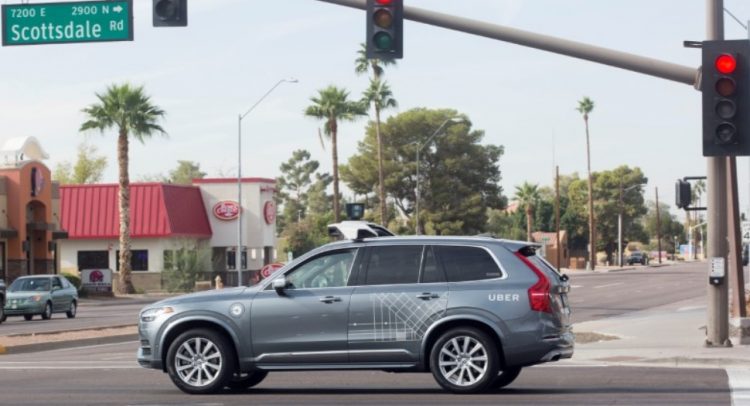 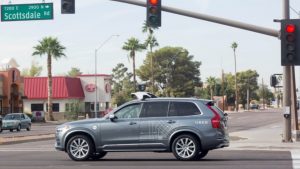 A woman crossing a street was killed by an Uber self-driving sport utility vehicle in Arizona, police said on Monday, prompting the ride services company to suspend its autonomous vehicle program.

The accident in the Phoenix suburb of Tempe dealt a potential blow not only to Uber’s strategy but the eventual rollout of robot cars on public roads.

It was the first fatality from a self-driving vehicle, which are being tested around the globe in a high-profile race by global automakers and tech companies expecting that autonomous vehicles will transform transportation and the ride services business.

The vehicle was in autonomous mode with an operator behind the wheel at the time of the accident, which occurred overnight Sunday to Monday, Tempe police said.

“The vehicle was traveling northbound … when a female walking outside of the crosswalk crossed the road from west to east when she was struck by the Uber vehicle,” police said in a statement.

Police identified the victim as Elaine Herzberg, 49. Herzberg later died from her injuries in a hospital, police said.

Local television footage of the scene showed a crumpled bike and a Volvo XC90 SUV with a smashed-in front.

An Uber Technologies Inc spokesman said the company was suspending North American tests of its self-driving vehicles. In a tweet, Uber expressed its condolences and said the San Francisco-based company was fully cooperating with authorities.

Volvo confirmed the vehicle was a Volvo XC90, which Uber has been using special versions of in its testing. Russell Datz, a spokesman for the automaker, said the autonomous technology was not made by Volvo.

The U.S. National Highway Traffic Safety Administration (NHTSA) and National Transportation Safety Board (NTSB) said they were sending teams to investigate the crash. NHTSA also said it was in contact with Volvo. The Swedish car brand is owned by China’s Geely [GEELY.UL].

In Canada, the Ministry of Transportation in Canada’s Ontario province, which is overseeing Uber’s on-road autonomous testing in Toronto, said it was reviewing the accident.

On Friday, Alphabet Inc’s self-driving unit Waymo and Uber urged Congress to pass sweeping legislation to speed the introduction of self-driving cars into the United States. Some congressional Democrats have blocked the legislation over safety concerns, and Monday’s fatality could hamper the quick passage of the bill, congressional aides said Monday.

“This is a wake-up call to the entire AV industry and government to put a high priority on safety,” tweeted former U.S. Transportation Secretary Anthony Foxx.

Senator John Thune, who heads the Senate Commerce Committee, and has been urging Congress to pass sweeping legislation to speed self-driving cars to U.S. roads, said in a statement the accident “underscores the need to adopt laws and policies tailored for self-driving vehicles.”

Fallout from the crash “will likely prove negative for all auto makers and suppliers with aspirations in autonomous driving, Buckingham Research Group analyst Glenn Chin wrote in a client note. “A human fatality is likely to spur increased public and regulatory scrutiny of AVs around a process that is admittedly quite lax in the U.S.”

Arizona has opened its arms to companies testing self-driving vehicles as a means to economic growth and jobs. Republican Governor Doug Ducey signed an executive order in 2015 allowing for the testing of such vehicles on Arizona streets and reached out to Uber a year later after California regulators cracked down on the company over its failure to obtain testing permits.

What to Do When Anxiety Is Driving You to Overeat