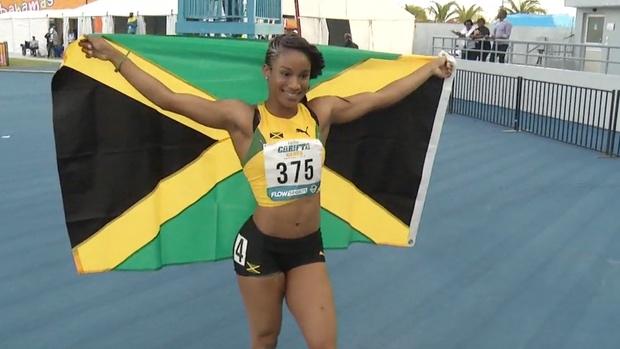 A race isn’t over until it’s over.

That’s usually the case, anyway. But the women’s 100m at the IAAF World U20 Championships Tampere 2018 was effectively all over in the first few strides.

Prodigious Jamaican Briana Williams, who turned 16 just a few months ago, shot out of the blocks to steal a march on world U20 leader Twanisha Terry of the USA. Terry, who had clocked a championship record of 11.03 (0.4m/s) to win her semifinal, couldn’t make up the ground on Williams as her younger rival held on to victory in 11.16.

Despite being the youngest 100m entrant of the entire championships, Williams was a model of poise and composure in the final. It was only when she crossed the line that her face lit up with emotion, her eyes and mouth wide open in pure disbelief.

Terry was gaining on Williams with every stride but the US U20 champion didn’t look anywhere near as controlled as she did throughout the rounds and ultimately had to settle for silver in 11.19.

Britain’s Kristal Awuah, who had been the third-fastest in the heats and semifinals, lived up to expectations to take the bronze medal in 11.37, 0.04 ahead of Germany’s Keshia Kwadwo.

“It feels amazing to win this race,” said Williams. “I’ve been training for this race all season long.”

“We knew that she’d most likely be in the lead at 50 metres,” he said. “I told her before the race that if she panics, then the others will go past her, but if she holds her form, she can win it.”

Williams will have two more chances to add to her medal collection as she is entered for the 200m and 4x100m. Terry is also entered for the latter, setting up an exciting rematch.