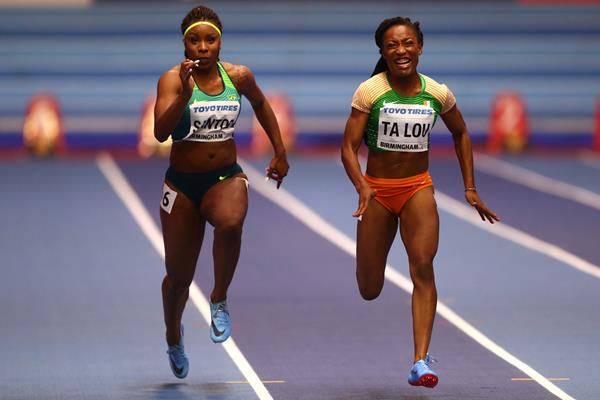 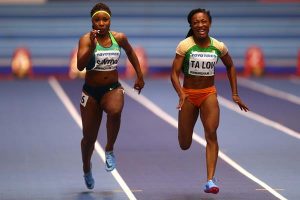 There were no upsets as the race to be crowned the world’s fastest woman got off to a strong start, as all of the main protagonists safely progressed to this evening’s semi-final stage.

The surprise fastest in qualifying was France’s Carolle Zahi, who sped to a fine 7.11 lifetime best to take the fourth heat, whilst heat two winner, Murielle Ahoure of Ivory Coast clocked 7.12.

The four-time world sprint silver medallist indoors and out is followed on progression list by European 100m bronze medalist, Mujinja Kambundji of Switzerland who registered 7.15 behind Zahi.

A warm favourite to take the gold, Marie Josee Ta Lou claimed the second heat in 7.17. A compatriot of Ahoure, the world outdoor 100m and 200m silver medallist looked comfortable as she began her campaign to clinch her first global title.

Britain’s big hope, Asha Philip qualified as fifth fastest with a 7.18 clocking. The European indoor champion hopes to finally reach the podium, having twice finished fourth in these championships.

Germany’s Tatjana Pinto claimed the sixth heat with 7.18, whilst the 2016 silver medalist Dafne Schippers won the fifth heat in 7.19. The two-time world outdoor 200m champion from the Netherlands will expect to be the top European sprinter here.

Remona Burchell of Jamaica sped to 7.19 as Jamaica’s Olympic 100m and 200m champion, Elaine Thompson, ignited her campaign after a lacklustre start to the season with 7.20 behind Ta Lou.

Ezinne Okparaebo, Norway’s two-time European indoor medallist, took the first heat in 7.22, ahead of Michelle-Lee Ahye who was timed at 7.23 for Trinidad and Tobago.

Meanwhile, Anna Kielbasinska of Poland caught the eye with a 7.23 equal lifetime best behind Ta Lou and Thompson in the second heat.

Other notable names who impressed in qualification include South Africa’s Carina Horn with 7.23, American duo Destiny Carter and Javianne Oliver with 7.24 and 7.29, respectively and Poland’s European indoor bronze medallist, Ewa Swoboda, who registered 7.24 to qualify.

Flu Frenzy: How The Flu Spreads And Kills So Quickly

PM defends Marlene's return: 'We all deserve a second chance'