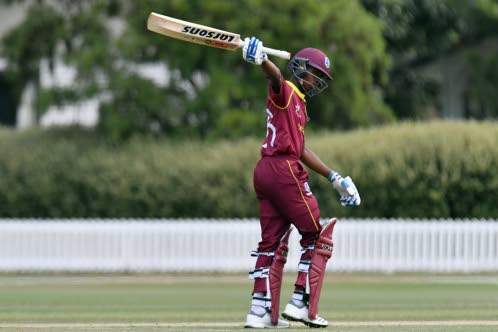 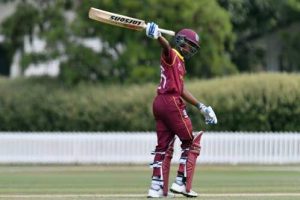 Alick Athanaze seems to be in the right place at the right time. He was a late replacement for the injured Delorn Johnson in the Windward Islands Volcanoes for the just concluded Super50.

What a way he took the opportunity and made the best use of it.

Following the passage of Hurricane Maria in his home in Dominica, Alick said the “experience played a huge role in his motivation to perform well at the recently-concluded ICC Under 19 World Cup in New Zealand.

Athanaze and his coach in Dominica, Sam Kirnon, have been working together for the last year and after the passage of the hurricane found a way to work out to keep sharp to prepare for the World Cup. He credits Kirnon for the work they put in.

Despite the team’s inability to get to the Championship round, Athanaze made 418 runs to emerge as the top runs scorer for the tournament. He describes the World Cup experience as “a life changing one which helped him to build his confidence and understanding of the game. One which also taught me how to deal with pressure and how to go about different scenarios at different stages of the game.”

He was a bright spark for the WINDIES as he was the only representative on the ICC-select squad. The 19-year old says his best moment of the World Cup was his 110 not out against Sri Lanka; while his most disappointing was the loss and the manner in which his team lost to New Zealand.

Athanaze, just last Saturday (February 24), played a steady and calm inning to help his team, the Windward Island Volcanoes towards a three-wicket win over defending champions, Barbados Pride in the Super50 Cup FINAL.

With 28 still required from 33 deliveries, the 19-year-old Athanaze put on a mature performance to play a major role in a 31-run eighth-wicket stand with Captain Shane Shillingford, to steer the Volcanoes towards the Super50 Cup title final, taking home the Clive Lloyd trophy.

Athanaze has a little ritual before he goes out to bat; “I put on all my left gear first and on approaching the rope, I say a little prayer.”

In another three to five years, Athanaze thinks he will be an established franchise team player heading to the senior WINDIES team.

His favorite food/meal is chicken burger with fries. And he enjoys dancehall music in his spare time.

7 Signs You Could Have Type 1 Diabetes