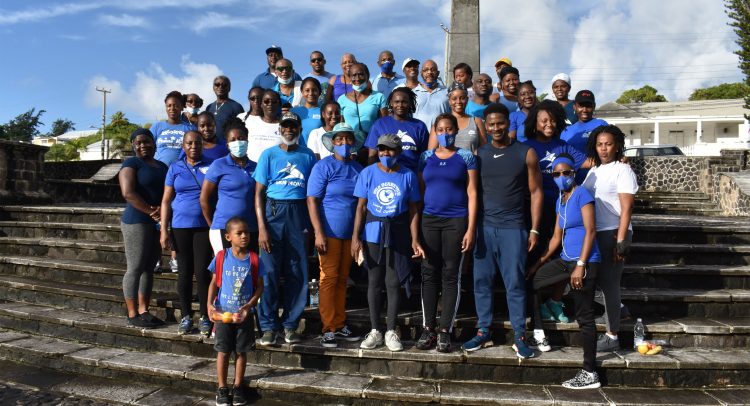 The walk, which was held under the theme ‘Walk to Cure Diabetes’, took the participants who included the Minister of Health the Hon Akilah Byron-Nisbett and the Permanent Secretary Dr Delores Stapleton-Harris, from the Cenotaph at the War Memorial to the Eastern Caribbean Central Bank and back via Bay Road.

“The St. Kitts Diabetes Association we have been having our week of activities which started on Sunday November 8 by worshipping at the St. George’s Anglican Church,” observed the association’s Public Relations Officer, Dr Reginald O’Loughlin when he talked to the media at the end of the Grand Walk which saw the majority of participants wearing blue.

“On Monday evening we had a very interesting panel discussion on radio and television, and then on Friday that is yesterday, we were in the Square doing our annual downtown screening for the general public,” added Dr O’Loughlin who was accompanied by President of the St. Kitts Diabetes Association, Nurse Christine Wattley. “This morning of course you witnessed the Walk for Diabetes and tomorrow (Sunday November 15) we will conclude this week with the annual general meeting.”

World Diabetes Day was created in 1991 by the International Diabetes Federation (IDF) and the World Health Organisation (WHO) in response to growing concerns about the escalating health threat posed by diabetes. World Diabetes Day became an official United Nations Day in 2006 with the passage of United Nations Resolution 61/225, and it is observed every year on November 14, the birthday of Sir Fredrick Banting who co-discovered insulin along with Charles Best in 1922.

“We are privileged to have had assistance through collaborators such as the Development Bank of St. Kitts and Nevis, and the St. Kitts Nevis Anguilla National Bank,” observed Dr O’Loughlin. “These entities have come on board to help us in no small way to be able to achieve some of the goals – some of the things we wanted to achieve, and of course we would like to show our appreciation to those particular entities.”

Four Development Bank of St. Kitts and Nevis employees, Assistant Manager, Compliance Unit, Ms Veronica Boddie, Delinquency Officers Ms Gizelle Williams, and Ms Kristyl Bristol, and Accounting Officer, Ms Jasmin Primus, participated in the walk. The first group of five walkers returned to the War Memorial at 7:21 am, while they were closely followed by Ms Veronica Boddie who arrived at 7:25 am.

“The Board of Directors, Management and staff of the Development Bank of St. Kitts and Nevis applaud the St. Kitts Diabetes Association for the work it has been doing to educate the public not only on the dangers posed by diabetes, but most importantly how one can avoid contracting the disease, and to manage it if you are unlucky to have contracted it,” said Development Bank’s Manager, Human Resource Unit, Ms Danienne Brin.

“We at the Development Bank of St. Kitts and Nevis are fully cognisant of the old adage that a nation’s health is its wealth,” observed Ms Brin. “We have as a result partnered with the St. Kitts Diabetes Association over the years, and this year we were ably represented on the walk by four of our staff members who despite their demanding weekend chores chose to take part and to partake of the health benefits that come with such an exercise.”

The St. Kitts Nevis Anguilla National Bank was represented by Chairman of the Board of the National Bank Group of Companies, Mr Alexis Nisbett, and a number of their staff members.

Dr O’Loughlin also thanked members of the St. Kitts Nevis Red Cross, who have been collaborating with the St. Kitts Diabetes Association, saying that they were in the Square on Friday and their presence was felt throughout the walk as they ensured that no one experienced difficulties, health-wise, during the walk.

“And overall I wish to thank all those people who came out to support, even those who gave us words of wisdom and encouragement,” said O’Loughlin. “We are very appreciative of that and we hope that they stick and stay with us as we continue the fight with diabetes and with all the people who are suffering in order to encourage them to do the right thing: Follow the gospel according the St. Kitts Diabetes Association, the TEEM Gospel, that is to say Testing, Exercising, Eating right, and taking their Medication in a disciplined fashion.”

No money there to fix roads in Antigua