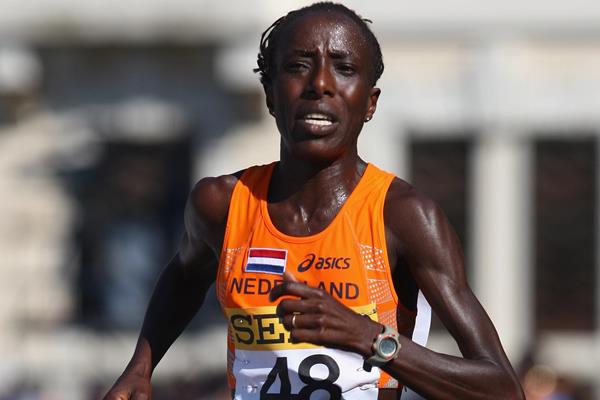 No distance defines Lornah Kiplagat quite like the half marathon.

During a long and glittering endurance running career, which included winning the world cross-country title plus success over the marathon and on the track, it was her hat-trick of world half marathon titles scooped from 2006 to 2008 – the former two courtesy of world best marks – with which she is best associated.

Competing against an experienced field, which included defending champion Tegla Loroupe and South Africa’s Elana Meyer, she finished more than three-and-a-half minutes behind Loroupe, the race winner, in 21st.

“It was only my second World Championships after competing at the World Cross in 1996 but my run in Uster encouraged me and motivated me that the future will be better,” she says.

By the time Kiplagat returned to the World Half Marathon Championships some seven years later, she was a different athlete. Having learned to conquer her nerves, which had plagued her during the early phase of her career, she went into the 2005 edition in Edmonton as a mentally stronger athlete. She was also among the favourites, having triumphed at the Rotterdam Marathon earlier that year.

Yet in torrid wet conditions in Alberta, she suffered a nagging hamstring cramp, which made the race a hard slog.

“I didn’t have a lot of fun,” she recalls of the 2005 edition. “It was raining for most of the race, I couldn’t get warm and I felt cold for the entire run. My hamstring cramped very early in the race but I didn’t want to drop out; I hoped to manage the problem.”

To that end, Kiplagat was successful. She took the silver medal in a tight battle from Kenyan Susan Chepkemei – just over a minute behind the race winner Constantina Dita of Romania – but was encouraged by her performance in challenging circumstances.

“The fact I was able to manage my hamstring during the race and could still sprint to silver in the later stages was a good sign for me,” she says.

Returning the following year for the temporarily renamed IAAF World Road Running Championships in Debrecen – where the competitors would tackle the slightly shorter 20km distance – Kiplagat had a new-found confidence after taking silver at the World Cross Country Championships earlier that year.

Her self-belief was justified. With a blistering pace from the outset, at 10km the leaders – including Kiplagat – were some 49 seconds under Paula Radcliffe’s 20km world record pace.

“I felt very strong throughout the race and I was determined to win gold this time and not silver again,” recalls Kiplagat. “I felt very happy to be become a world champion and this motivated me to achieve more. It was incredible to attain a world record at a World Championship.”

Kiplagat entered the defence of her title the following year in Udine (reverting back to the traditional half-marathon distance) lacking in confidence. Earlier that year she was elated to defeat the track and cross-country specialists in Mombasa to take add the world cross-country title to her growing CV. But a calf injury later in the year forced her to abandon attempts to run at the IAAF World Championships in Osaka and the injury had created nagging doubts leading into Udine.

“I was worried because I knew I hadn’t trained much in the weeks leading into the competition,” she explains. “I never expected to win because my injury had not completely cleared and I didn’t know how it would act.”

Instead, the enforced training break worked wonders as she encountered no injury issues in Udine and sped to the gold medal courtesy of a world record time of 1:06:25, as well as lowering her 20km best.

After 10km – reached in 31:10 – only Kenyan Mary Keitany could live the pace before Kiplagat maintained her relentless speed to burst free from her rivals and lower Meyer’s eight-year-old world record.

“I was surprised by the speed at 5km, 10km and 15km,” she says. “I felt comfortable and my injury did not cause me any problems. I couldn’t believe I could run away from the group. I remember the cheering at the finish line. I had goose bumps all over. It felt great.

“Alongside the World Cross Country Championships, it will remain my best race,” she added. “To win and break a long-standing record in a World Championship when not expected to because of a calf injury was incredible.”

She returned in 2008 in an effort to secure a hat-trick of titles in Rio and would not be denied.

Hampered by a knee problem in the countdown to the event, she once again managed to overcome injury to deliver the golden ticket as she romped to a resounding win in 1:08:37, finishing 80 seconds ahead of silver medallist Aselefech Mergia of Ethiopia.

“I vividly remember running alone along the beautiful beach of Copacabana and Sugarloaf Mountain,” said Kiplagat, who broke clear of the field after just seven kilometres. “Those memories will stay with me forever.

“To win gold three times in a row at my favourite distance, I couldn’t ask for more and I’m honoured to be part of history.

“My three world half marathon wins have made me the person I am today, and it continues to motivate me every day to promote running as either a professional or recreational activity.”

Kiplagat insists the IAAF World Half Marathon Championships are special because of the standalone attention the athletes receive, coupled with the mass participation element to the race.

Yet one question remains: why does she feel she was suited to the half-marathon distance?

“Throughout my career,” she says, “I felt the half marathon was the distance I could manage and give my all comfortably without damaging my body.”