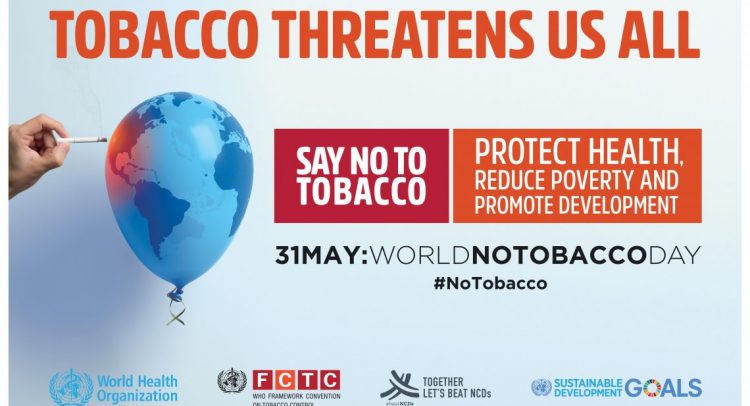 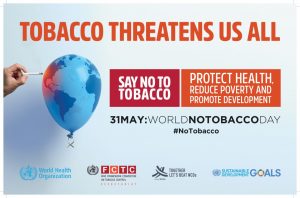 St. Kitts and Nevis joins the global community in observing “World No Tobacco Day” on Thursday 31st May 2018, which focuses on the impact of tobacco on the cardiovascular (or heart) health of people worldwide. Tobacco use is an important risk factor for the development of coronary heart disease, stroke and peripheral vascular disease. However, despite the devastating harms of tobacco to heart health, and the availability of interventions to reduce tobacco-related death and disease, knowledge among large sections of the public that tobacco is one of the leading causes of CVD is low.

Cardiovascular Diseases (CVD) are responsible for more deaths worldwide than any other condition. Tobacco use and second-hand smoke exposure contribute to approximately 12% of all heart disease-related deaths. Tobacco use is the second leading cause of CVD, after high blood pressure.

The global tobacco epidemic kills more than 7 million people each year, of which close to 900,000 are non-smokers dying from breathing second-hand smoke. Nearly 80% of the more than 1 billion smokers worldwide live in low- and middle-income countries, where the burden of tobacco-related illness and death is heaviest. In St. Kitts and Nevis, research has shown that 8.7% of the adult population smoke tobacco, while 6% smoke tobacco on a daily basis. Among our children, 9.2% currently use a tobacco product. Additionally, 13.8% of the children indicated having at least one parent who smokes.

This year’s observance of “World No Tobacco Day” is meant to increase awareness on the:

• link between tobacco and heart and other cardiovascular diseases (CVD), including stroke, which combined are the world’s leading causes of death;
• feasible actions and measures that key audiences, including governments and the public, can take to reduce the risks to heart health posed by the use of, and exposure to tobacco. One major action that can be taken to eliminate the health risks posed by tobacco is the establishment of a 100% Smoke Free Policy. The Ministry of Health has concluded that one way to protect nonsmokers from second-hand smoke is to require completely smoke-free workplaces and public places. You too can support this initiative by:

• Encouraging that your family members or friends to quit smoking. Affected persons can also seek advice from their family physician on quitting the smoking habit.

• Avoiding second-hand tobacco smoke in the home, school, workplace and other public settings.

In addition to these proactive measures, the general public can also do their part in advocating for and supporting smoke-free laws. On this score, it should be noted that the Ministry of Health, in collaboration with the Ministry of Justice and Legal Affairs, has already started the process of drafting tobacco control legislation which will shortly become the subject of stakeholder consultations prior to introduction of the Bill in Parliament. The passage of this legislation was one of several commitments given by CARICOM Heads of Government in September 2007 when the Port of Spain Declaration was endorsed by the Member States.

The Federal Ministry of Health calls on citizens and residents of St. Kitts and Nevis to rally together to increase awareness of the cardiovascular health risks posed by tobacco use and exposure; to help smokers to quit; and to recognize the importance of advocating for stronger, evidence-based tobacco control policies.

Avoiding GMO food might be tougher than you think