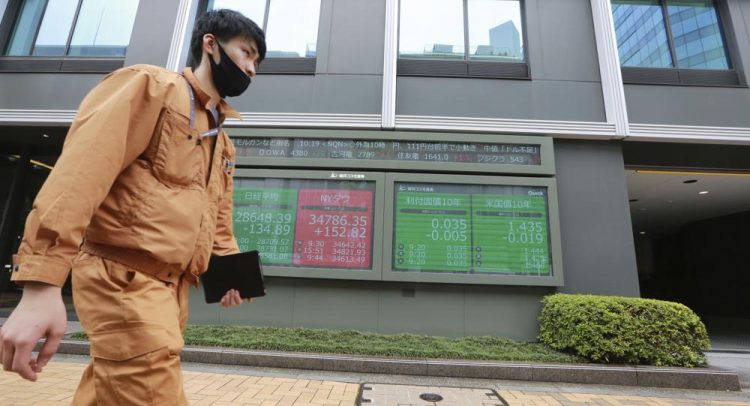 BANGKOK (AP) — Global shares were mixed Monday in quiet trading, with U.S. markets set to be closed for the Independence Day holiday.

Oil prices reversed early losses ahead of a meeting of oil producing nations as the United Arab Emirates pushed back against a plan by the OPEC oil cartel and allied producing countries to extend a global pact to cut oil production beyond April 2022.

Benchmark U.S. crude oil picked up 22 cents to $75.38 per barrel in electronic trading on the New York Mercantile Exchange. It shed 7 cents on Friday to $75.16 per barrel. Brent crude, the international standard, added 30 cents to $76.47 per barrel.

The UAE, one of OPEC’s largest oil producers, wants to increase its output — setting up a contest with ally and OPEC heavyweight Saudi Arabia, which has led a push to keep a tight lid on production.

The combined OPEC Plus grouping of members led by Saudi Arabia and non-members, chief among them Russia, failed to reach an agreement Friday on oil output. Negotiations over the dispute are set to resume Monday.

China announced over the weekend that Chinese ride-hailing service Didi would be removed from app stores in the country in the latest blow after its shares began trading in New York on June 30.

The U.S.-listed shares of Didi slumped 5.3% on Friday after China’s internet watchdog said it launched an investigation into the company to protect national security and public interest.

On Friday, the S&P 500 rose 0.8%, its seventh straight gain and seventh consecutive all-time high. The benchmark index also notched its second weekly gain in a row. The Nasdaq also set a record, getting a boost from technology stocks, which led the broad market rally. The only laggards were energy stocks and banks, which fell as Treasury yields headed lower.

A U.S. government report said employers hired 850,000 more workers than they cut last month, a healthier reading than the 700,000 economists expected and an acceleration following a couple months of disappointing growth.

Still, unemployment remains well above the 3.5% rate that prevailed before the pandemic struck, and the economy remains 6.8 million jobs short of its pre-pandemic level. And while wages grew in June, the increase was less than expected, a good sign for investors worried about inflation pressures.

Treasury yields were steady Monday, with the yield for the 10-year Treasury at 1.43%.

Low interest rates help drive up prices for all kinds of stocks, but they provide particularly powerful fuel for high-growth companies whose prices may otherwise look expensive.

A man walks by an electronic stock board of a securities firm in Tokyo, Monday, July 5, 2021. Shares were mixed Monday in Asia in quiet trading, with U.S. markets set to be closed for the Independence Day holiday. (AP Photo/Koji Sasahara)

Dr. Wilkinson assures that all expired vaccines have been discarded; dispels rumours about lack of contact tracing

Israel looks to renew law that keeps out Palestinian spouses