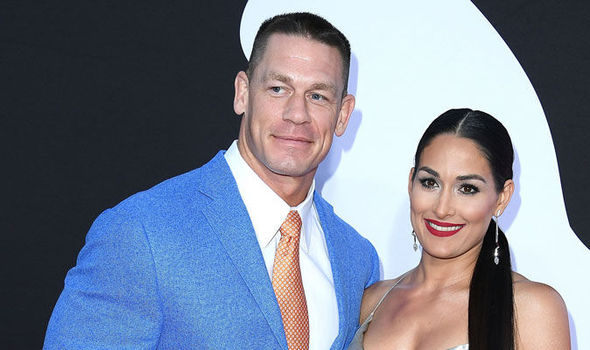 WWE star Nikki Bella has revealed more details on her split from John Cena amid rumours she will return to the ring to face Ronda Rousey at the upcoming Evolution show. Nikki opened up about the split from the WWE legend in an interview following her return at SummerSlam.

The 34-year-old is reportedly readying to headline WWE’s first ever all women’s pay-per-view Evolution against Rousey.

Cena and Nikki were the top power couple in wrestling until they sensationally split after WrestleMania.

Breaking up just weeks before their wedding, the couple had been together for six years before calling time on the relationship.

She revealed the two had come to a conclusion one of them had to sacrifice their career for the other.

Nikki told Page Six: “One person had to sacrifice their career [for us to be together], but I’m not willing to do that. I’m just not the girl who hangs out on set. I have my own career. I want to be one of Forbes’ top entrepreneurs.”

She and her twin sister Brie made their return to WWE television at SummerSlam – celebrating with Rousey after the UFC fighter won the Raw Women’s Championship.

The Total Divas star also rubbished rumours the separation from Cena had been staged for the reality TV show.

She said: “”People said it was fake for ratings – don’t you think a wedding would be best for ratings? I would never fake a break-up. And when people keep questioning it, it actually makes your heart ache even more.”

Nikki also once again poured cold water on rumours it was Cena’s reluctance to have kids that triggered the break-up. She claimed her niece Birdie – the daughter of Brie and WWE legend Daniel Bryan – has been the “best form of birth control”.

The star is now semi-retired and is focusing more on her reality TV work than professional wrestling – last appearing in-ring in a one-off showing at the Royal Rumble. Brie and Nikki have been mainstays of the WWE since the late noughties and were for some time the face of the so-called “Divas”.

Both sisters are still major ambassadors for the WWE and also front the company’s reality shows – Total Divas and Total Bellas.

Women’s wrestling has changed since the time of their debut however, with the so-called Women’s Revolution. Nikki is longest reigning Diva’s champion – holding the pink and silver belt for 301 days before being dethroned by Charlotte Flair.

Some fans have been unhappy about suggestions Nikki could face Rousey at Evolution – branding it a “waste” of the UFC fighter.