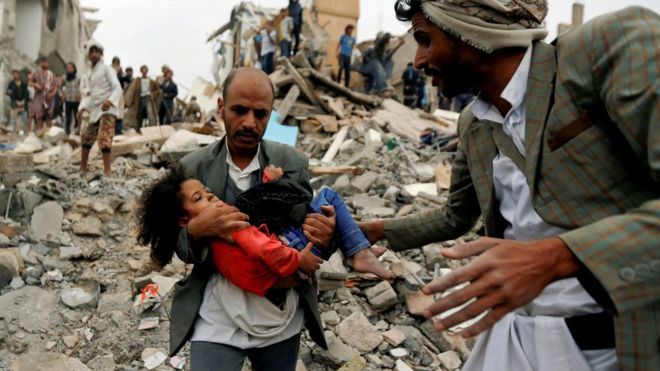 UN human rights experts believe war crimes may have been committed by all parties to the conflict in Yemen.

In their first such report, they allege Yemeni government forces, the Saudi-led coalition backing them, and the rebel Houthi movement have made little effort to minimise civilian casualties.

They point to attacks on residential areas in which thousands have died.

The experts will present their report to the UN Human Rights Council next month.

Why is there a war in Yemen?
Yemen has been devastated by a conflict that escalated in early 2015, when the Houthis seized control of much of the west of the country and forced President Abdrabbuh Mansour Hadi to flee abroad.

Alarmed by the rise of a group they saw as an Iranian proxy, the UAE, Saudi Arabia and seven other Arab states intervened in an attempt to restore the government. They have received logistical and intelligence support from the US, UK and France.

At least 6,660 civilians have been killed and 10,563 injured in the fighting, according to the United Nations. Thousands more civilians have died from preventable causes, including malnutrition, disease and poor health.

The fighting and a partial blockade by the coalition has also left 22 million people in need of humanitarian aid, created the world’s largest food security emergency, and led to a cholera outbreak that is thought to have affected 1.1 million people.

The so-called Group of Experts note that coalition air strikes have caused most direct civilian casualties, and that they have hit residential areas, markets, funerals, weddings, detention facilities, civilian boats and medical facilities.

The report says they “have reasonable grounds to believe that individuals in the government of Yemen and the coalition may have conducted attacks in violation of the principles of distinction, proportionality and precaution that may amount to war crimes”

They add that the naval and air restrictions imposed by the coalition on rebel-held areas to halt alleged weapons smuggling may also constitute a violation of the proportionality rule of international humanitarian law, while the effective closure of Sanaa airport may violate the principle of protection for the sick and wounded.

The experts also expressed concern at the situation in the southern city of Taiz, where the Houthis have been besieging a government-held area for three years.

The report says civilians, including women and children, have been hit by shelling and snipers from the Houthis and other parties while in their homes, fetching water at local wells, or on their way to purchase food or seek medical attention.

The Houthis are accused of indiscriminately using “weapons with wide area effect” in Taiz and other urban settings, which would constitute a war crime. The experts also found evidence of widespread arbitrary detention throughout the country by all parties, and ill-treatment and torture of some facilities.

Victims and witnesses also described to the experts “persistent and pervasive aggressive behaviour”, including sexual violence perpetrated by a pro-government force known as the Security Belt and UAE personnel, according to the report.

The experts say they also received information indicating all parties had conscripted or enlisted children – some as young as eight years old – and used them to participate actively in hostilities. There was no immediate response from the coalition, Yemen’s government, or the Houthis. But the BBC’s Imogen Foulkes in Geneva says Saudi Arabia did not want this inquiry, and will not like its findings. On Monday, the coalition accused the UN team in Yemen of bias after it called for expressing condolences to the families of more than 30 civilians, including 22 children, reportedly killed in two air strikes last week.

The experts say they have identified, where possible, individuals who may be responsible for war crimes and passed a confidential list of their names to the UN high commissioner for human rights.

They also urged the international community to “refrain from providing arms that could be used in the conflict” – an apparent reference to Western countries, who are selling weapons to the coalition, and to Iran, which the coalition alleges is smuggling weapons the Houthis.

“Despite the severity of the situation, we continue to witness the total disregard for the suffering of the people of Yemen. This crisis has reached its peak with no apparent sight of light at the end of the tunnel,” Charles Garraway, one of the experts, told a news conference.