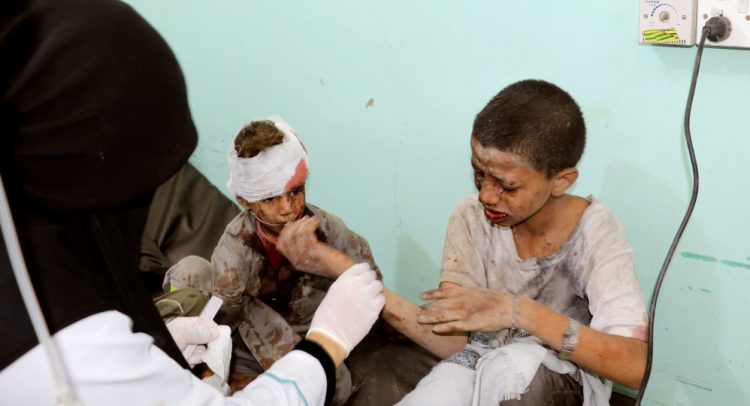 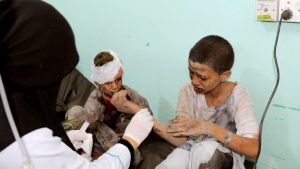 The Saudi-UAE military alliance at war with Yemen’s Houthi rebels has been blamed for an air attack on a school bus that killed dozens of people, including at least 29 children.

The vehicle came under attack as it was driving near a crowded market in the Houthi-controlled province of Saada, which borders Saudi Arabia, said the International Committee of the Red Cross (ICRC).

“A hospital supported by our team in Yemen received the bodies of 29 children under the age of 15 and 48 wounded, including 30 children,” the ICRC said in a post on Twitter.

Johannes Bruwer, the head of an ICRC delegation in Yemen, said in a Twitter post: “Scores killed, even more injured, most under the age of 10”.

Earlier, Ghani Nayeb, the head of a health department in Saada, told Reuters news agency the overall death toll stood at 43 with 61 wounded.

According to multiple sources, the attack took place early on Thursday outside a busy market in Dahyan city.

Al Masirah, a pro-Houthi rebel TV network, said the bus, which was carrying a group of students attending summer classes learning the Holy Quran, was targeted.

Al Jazeera could not independently verify the reports.

The network posted several videos on Twitter showing the aftermath of the attack, including one with several dead children, and another of blood pouring from the heads of three child survivors.

The Saudi-UAE alliance later issued a statement to the Saudi-owned Al-Arabiya network saying it launched the attacks on Saada, but that it had targeted “missile launchers”.

However, Nasser Arrabyee, a Yemeni journalist based in the capital Sanaa, said there were no Houthi fighters in the vicinity of the market where the attack took place.

“The place is known to be a market, [and] there is no military installation nearby … but the Saudis are known to have done this many times – target schools, weddings and so on.”

He added that health centres in the war-ravaged province would struggle with the number of wounded, and the death toll was likely to rise.

“It’s difficult to treat such a big number of injured in Sanaa, let alone in Saada, which is very remote and primitive.

“This makes the situation worse, with many of the wounded likely to die because there is no treatment, no medicine”.

Arrabyee added, “even first responders, were killed”, with their “body parts scattered.”

“The Saudis tend to deny these kinds of actions, which have sadly become all too common,” he said. “It’s all too rare for either party [the alliance or the Houthis] to take responsibility”.

The United Nations agency for children UNICEF condemned the attack.

Later on Thursday, sounds of blasts from air raids that hit Sanaa reverberated across its southern and western neighbourhoods. It was not immediately clear if there were any casualties in those attacks.

“Planes are still circulating in the sky and we expect more strikes,” she said.

Veldwijk added that if attacks on civilian areas continue, aid agencies would not be able to continue with their work.

“This needs to stop, there’s no way we can continue with our work with all these air strikes,” she added.

With logistical support from the United States, Saudi Arabia and the United Arab Emirates (UAE) have carried out attacks in Yemen since March 2015. The war effort is an attempt to reinstate the internationally recognised government of President Abu-Rabbu Mansour Hadi.

In 2014, Hadi and his forces were overrun by the Houthi rebels who took over much of the country, including Sanaa.

Earlier this month, dozens of people – including women and children – were killed in Yemen’s Red Sea port city of Hodeidah in air raids carried out by the Saudi-UAE alliance.

According to the UN, at least 10,000 people have been killed in the three-year war – a death toll that has not been updated in years and is certain to be far higher.

In June, Saudi and UAE forces carried out 258 air raids on Yemen, nearly one-third of which targeted non-military sites.

Impoverished Yemen, on the southern tip of the Arabian Peninsula, is now in the world’s worst humanitarian crisis, with more than 22.2 million people in need of assistance.

The UN special envoy for Yemen, Martin Griffiths, has been pushing the warring parties to restart peace talks. He recently announced plans to invite Yemen’s combatants to Geneva on September 6 to hold the first round of negotiations.