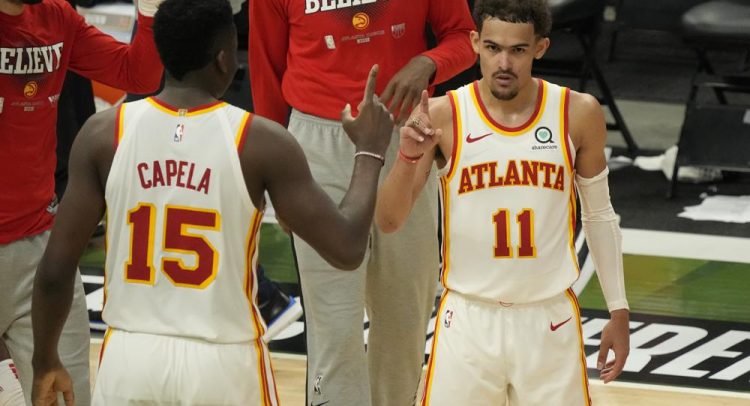 MILWAUKEE (AP) — Trae Young remains as poised as ever in hostile environments in his first postseason.

The Hawks improved to 6-2 in road playoff games this year and handed the Bucks their first home loss of the postseason.

Game 2 is Friday night in Milwaukee.

Milwaukee’s Khris Middleton missed a potential tying 3-pointer in the closing seconds. Although Middleton scored 15 points, he shot 6 of 23 and missed all nine of his 3-point attempts.

“I’ve just got to be better,” Middleton said. “It’s as simple as that.”

Never before had the Hawks won an Eastern Conference finals game since moving to Atlanta in 1968. The Hawks reached the East finals in 2015, but were swept by Cleveland.

“It’s special,” Young said. “I wanted to achieve things like this when I was a rookie. Coming in as a rookie, you don’t know how hard it is until you’ve got to actually do it.”

John Collins added 23 points and 15 rebounds for the Hawks. Capela had 12 points and 19 rebounds.

Antetokounmpo scored the first six points in a 9-0 run that turned a 98-96 deficit into a 105-98 advantage with 4:18 left. But the Hawks scored the next five points, and the game went back and forth from there.

“It’s a matter of us just trying to withstand, hold the fort and try to make plays,” Collins said. “And I feel like we did that down at the end.”

Middleton missed a pull-up jumper with about 43 seconds left with Milwaukee ahead 111-110. Young missed a shot on the other end of the floor, but Capela grabbed his 19th rebound and scored to put the Hawks in front for good.

After Milwaukee’s Pat Connaughton shot an air-ball on a 3-pointer, Young made two free throws with 17.3 seconds remaining.

“He was wide open,” Antetokounmpo said about Connaughton’s shot. “Make or miss, we live with that. We believe in him.”

Antetokounmpo made a pair of free throws with 5.3 seconds left, but Young brought the lead back to three and closed the scoring by sinking two free throws of his own with 4.6 seconds remaining.

His focus at the line revealed the veteran savvy the 22-year-old Young has displayed throughout his first career postseason.

“He’s a great player,” Antetokounmpo said. “We’ve got to make it as tough as possible for him, be physical with him. We don’t want to send him to the free-throw line. We just got to make it, from the first minute to the last minute, tough.”

Hawks: Bogdan Bogdanovic started but clearly was at less than full strength as he deals with a sore knee. He scored four points and shot 1 of 6. … Cam Reddish was available to play for the first time in four months but didn’t play. Reddish hadn’t played since Feb. 21 due to a right Achilles injury. Hawks coach Nate McMillan had said before the game the Hawks would cautious with Reddish by keeping him behind Tony Snell and Solomon Hill in the rotation. “We haven’t had the opportunity for him to get in any five-on-five since he’s been off,” McMillan said. “He’s been playing the last week or so some two-on-two, three-on-three.”

Bucks: Bobby Portis came off the bench with 4 1/2 minutes left in the first quarter and ended up with 11 points and eight rebounds. Portis hadn’t played a single minute in the last three games of the Bucks’ second-round series. … Milwaukee fell to 11-3 in playoff games at Fiserv Forum. … This is the fifth time the Bucks and Hawks have faced off in the playoffs and their first postseason matchup since the Hawks won 4-3 in a 2010 opening-round series. They’ve split the four previous matchups.

Atlanta Hawks’ Trae Young and Clint Capela celebrate after Game 1 of the NBA Eastern Conference basketball finals game against the Milwaukee Bucks Wednesday, June 23, 2021, in Milwaukee. The Hawks won 116-113 to take a 1-0 lead in the series. (AP Photo/Morry Gash)

What should I know about the delta variant?

World shares mostly higher ahead of US price data