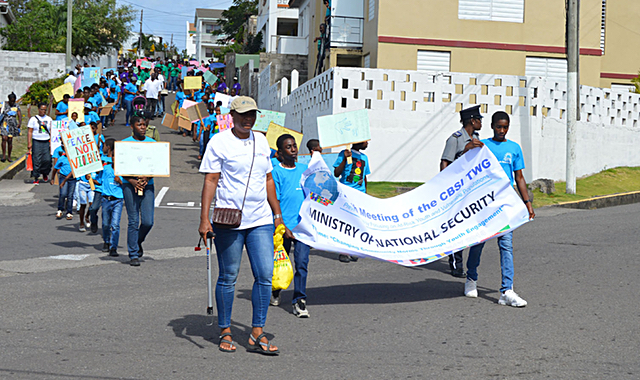 Youth get top support against crime from officials

Basseterre, St. Kitts, 15th May, 2018 (MyVueNews.com) – Deputy Prime Minister Shawn Richards made a commitment to the youth in support of their anti-crime initiatives during a rally at Independence Square on Saturday, 12th May, 2018.

Various youth organisations marched through the streets of Basseterre in an anti-crime youth initiative that is part of the CARICOM and USAID-sponsored Caribbean Basin Security Initiative.

Minister Richards, who has responsibility for youth, told the youth marchers, “I commit to you this morning that I will continue to be there by your side in your every step toward that day when no person has to live in fear of crime, or violence, in our Caribbean region again.”

The young marchers were supported with the presence of Prime Minister Dr. Timothy Harris, the minister with responsibility for National Security, Commissioner of Police Ian Queeley and other members of the Police High Command.

Richards thanked the Ministry of National Security, Permanent Secretary Mr Osmond Petty, Commissioner of Police Ian Queeley and his team of officers responsible for the development of the four Explorer clubs, and for being organisers of the Sandy Point Bikers Club.

According to the Deputy Prime Minister, their hard work was reflected in the bright faces and bright smiles in the young people who were present at Independence Square, as was their bright future in a free and safe St. Kitts and Nevis and the wider Caribbean.

He also applauded the efforts and commitments of the parents, guardians, teachers, counsellors and supporters of the young people, and urged them to continue being the source of positivity and encouragement to the country’s young people.

Dominica only Caribbean country to experience negative growth in 2018- IMF