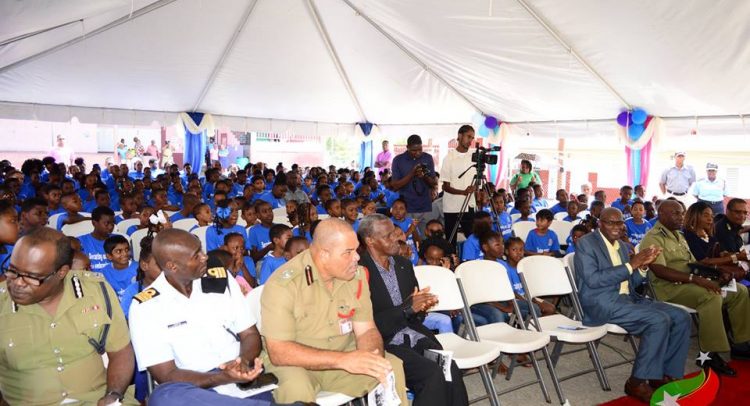 Basseterre, St. Kitts, July 31, 2018 (SKNIS): Members of the Community Policing Team within the Royal St. Christopher and Nevis Police Force (RSCNPF) have promised an enriching and rewarding experience to some 400 young people between the ages of 05 and 18-years-old attending its second annual camp, which runs from July 29 to August 04, 2018.

Camp activities began on Sunday (July 29) with worship at the Zion Moravian Church in Basseterre. An official opening ceremony was held on Monday (July 30), which was attended by a number of senior government officials including Prime Minister, Dr. the Honourable Timothy Harris, Permanent Secretary in the Ministry of National Security, Osmond Petty, Permanent Secretary in the Ministry of Education, William V. Hodge, heads of the local security forces, including the fire and rescue services, defence force and prisons, and proud parents.

The rest of the week will feature an exciting mix of learning and fun activities such as presentations by the police and other stakeholder agencies, cultural presentations, a visit to the St. Kitts Eco Park, a trip to Nevis, a Spelling Bee, street parade, and a fun day featuring sports, video games and movie screenings.

The camp is coordinated by Constable Lauston Percival, who worked closely with colleagues in the RSCNPF Community Policing Team headed by Inspector Rosemarie Isles-Roberts. Percival stressed the valuable experiences that the children will be exposed to and encouraged them to embrace the positives.

“Whatever you can get for this one week may be able to change somebody today, tomorrow, or even for life so I urge each and every one of you [to] take whatever is given at this camp, whatever advice, word of encouragement, whatever it is, I want you guys to take it seriously,” he said.

Permanent Secretary Petty singled out the Ross University School of Veterinary Medicine for being the platinum cash sponsor of the camp. He also credited key contributors to the annual event including the Ministry on Education, Surrey Paving and Aggregate Co. Ltd, the Chamber of Industry and Commerce (CIC), the Sugar Industry Diversification Foundation (SIDF), the Development Bank of St. Kitts and Nevis, IAS Auto Rental, Bullseye Auto Rental, the Foundation for National Development (FND), and the St. Kitts-Nevis-Anguilla National Bank (SKNANB).

The Ministry of National Security RSCNPF Explorers Group Annual Summer Camp is being held under the theme “Securing Our Future While Embracing Our Past.”