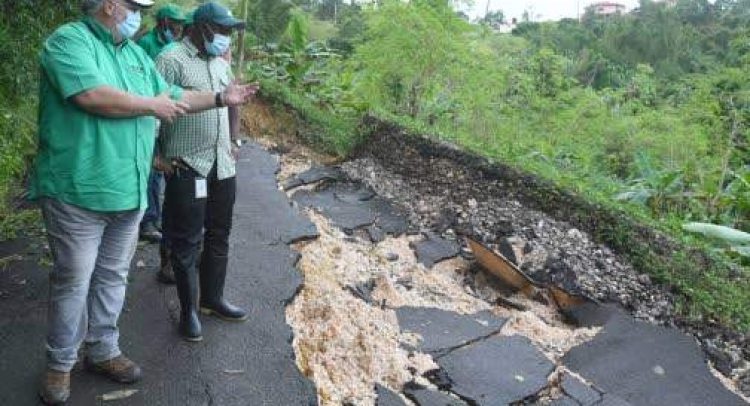 Landslides, roadblocks, and damaged infrastructure across central Jamaica yesterday lay in the wake of Tropical Storm Zeta. Though it was only the system’s outer bands that lashed the island over the weekend, the persistent heavy rainfall was more than enough to devastate much of the parishes of St Catherine and Clarendon.

It was evident from the uprooted trees, marooned residents, massive breakaways, displaced animals, and extensive flooding that neither hills nor plains were spared the wrath of Rio Cobre and Rio Minho.

The Bog Walk Gorge in St Catherine remained closed yesterday as a team from National Works Agency tried to clear large boulders that had fallen onto the roadway over the weekend. Motorists had to use alternative routes, as Flat Bridge — which had been submerged by Rio Cobre on Sunday — was also being cleared of silt.

Further downstream, operators at the Rio Cobre Dam deliberated about how they would remove a large tree deposited there.

“It was much higher yesterday; it’s calming down now,” explained system operator at the dam Shannon Evans as he watched the murky waters run through the facility. “When it’s like this now we just let it flow back into the river, because we can’t let it get into the system… A few months ago the dam was completely dry, so we’re still grateful for the water; better it too much than none at all.”

Residents and property owners on Brunswick Avenue, Johns Road, and Featherbed Lane in Spanish Town, as well as areas of Old Harbour, were not as happy for the rains, as for them it meant their houses and business places were inundated until the floodwaters receded.

In the neighbouring parish of Clarendon, the mighty Rio Minho had risen from its bed and marauded the area. Beginning in the hilly terrains of the north-west, tributaries that had lain dormant for years were fueled by the wet weekend to arise and reclaim their territory.

Along with massive landslides that displaced trees, mud, and boulders, rendering several roadways temporarily impassable, there was a major failure on the Gloucester section of the Victoria main road, which brought vehicular traffic to a halt.

“So what I do now is bring the passengers from Victoria to here, and then they walk across on the piece of road that’s left, and then another vehicle picks them up on the other side to take them to May Pen,” explained taxi operator Rajay “Indian” Osserope.

More than half of the road, which residents say was resurfaced and reinforced with groynes just over a year ago, had crumbled on Sunday, and now needs extensive repairs.

Not too far from there, in Top Quarter, 80-year-old Lola Johnson had the fright of her life while eating breakfast yesterday, as the ackee tree in her yard suddenly crashed through her roof.

“Mi hear something like something tear down, but mi never a penetrate it,” the elderly woman, who is hard of hearing, related to the Jamaica Observer from her verandah. “Afterwards, mi just feel weak and nervous, so mi fold mi hand dem tight and mi close mi eyes, but mi find say tears a come.”

Johnson has lived in that house all her life, and no hurricane had ever caused a tree to fall through her zinc roof.

“Mi look up and mi just peep and turn back round. A me one, so mi just sit down there. Nothing could I do,” she lamented. “What mi ago do? Mi can’t run out. Dem say when you feel the earth shake you must stay inside, so I stayed right there until afterwards the people start to come.”

Newly elected Member of Parliament (MP) for Clarendon North Western Phillip Henriques, who was touring the area, assembled a team to cut the tree from the house.

He attributed the widespread destruction to a lack of proper drainage in the hilly constituency.

“It’s a very mountainous area and, therefore, if the drains and the bushings are not kept up to scratch the water comes on to the roads and digs them up, and it causes tremendous problems,” he said. “That programme of maintenance and drain cleaning has not been done for many years by the previous MP, so the bush is blocking the drains in several areas, by garbage, as well as bush and earth that has grown up, because they have not been attending to it. That’s the main reason why our roads are now in such a bad shape.”

The MP also theorised that sub par workmanship had a hand in the breakaway in Gloucester, as he appealed to the National Works Agency to repair it quickly.

“This is a primary road. There is really no shortcut for it; so this is key, and I have hoped that it will be fixed soon,” he said.

Tractors and men with shovels were seen clearing the mounds of dirt and clumps of uprooted bamboos that littered the path.

Further down in York Town, the distance between two sets of neighbours who once lived on the same plot of land is growing, as the heavy rains continue eating away at their backyards. In the south, the Alley Bridge is reduced to single-lane traffic after a section of it was damage while the river was in spate. And, residents in Grove are now hunting for the crocodiles they sighted near their now-swamped houses.

Despite the havoc left in its wake, it was only yesterday, while moving further away from Jamaica, that Zeta was upgraded to a hurricane, as while the country was being lashed by its outer bands on Sunday, it was still just a tropical storm.