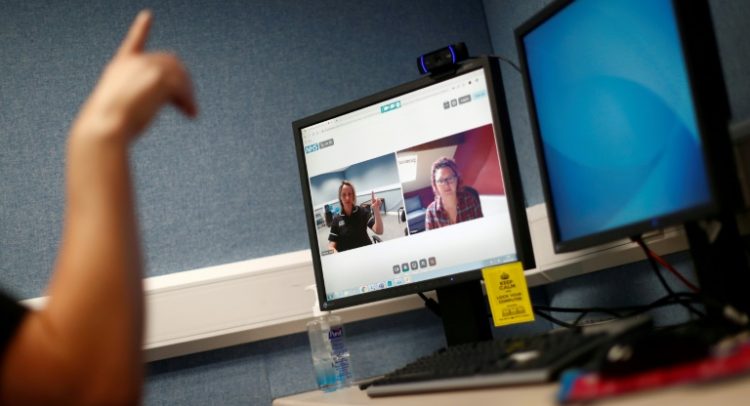 Zoom on Tuesday reported that its earnings soared as its video-meeting service became a popular way to work or socialize while hunkered down due to the coronavirus pandemic.

Zoom said it made a profit of $27 million on revenue that leapt 169 percent to slightly more than $328 million in the fiscal quarter that ended April 30.

In the same quarter a year earlier, Zoom reported zero dollars per share in net income for stockholders.

The quarter ended with Zoom having approximately 265,400 paying customers with at least 10 employees each — an increase of 354 percent from the first quarter in 2019, according to the company based in the Silicon Valley city of San Jose.

Zoom shares that ended the formal trading day up slightly gave back the gain in after-market trades, apparently due to concerns that its popularity will decline when restrictions on movements ease and people can get back to seeing one another in person.

Zoom told analysts that about half the growth in paid use was customers paying month-to-month, and those types of subscribers are more likely to leave than those who commit to annual memberships.

“It’s a reminder that Zoom is seeing an unusual spike during what we hope will be a relatively short term event,” independent tech analyst Rob Enderle said.

“Once you don’t have to socially distance as aggressively anymore, a lot of folks are going to want to go back to meeting in person.”

It is too soon to tell if monthly customers are abandoning Zoom in places where pandemic shelter-in-place rules are being eased because “even there people are taking their time to go back to work,” according to chief financial officer Kelly Steckelberg.

The earnings come with Zoom under pressure to deal with security and privacy as the platform faces scrutiny from rising usage.

It has taken heat over uninvited cyber guests disrupting online meetings with a tactic called “zoombombing.”

Zoom was originally built for businesses with dedicated IT teams to handle implementing security features, but first-time users flocked to the service to work or socialize from home due to the pandemic.

“As CEO, I should have done a better job,” Yuan said on an earnings video call with analysts.

“We should have played the role of IT for first-time users. We learned a hard lesson; this was a mistake I made.”

As a result the company has poured resources into privacy and security.

Zoom is also working on encrypting video meetings end-to-end, saying the feature will be made available only to its business customers and not at the free version of the service.

Photo: The video platform Zoom saw surging usage during the pandemic for everything from yoga classes to weddings to school classes for people sheltering at home (POOL/AFP/File / HANNAH MCKAY)